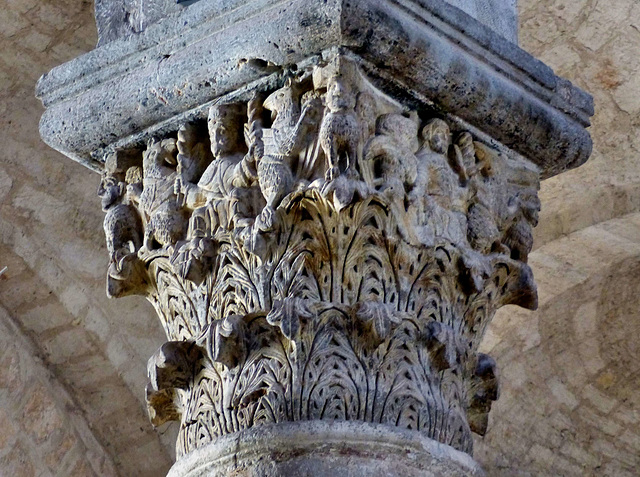 Bitonto, today a city of a population of about 55000, was probably founded by Greek settlers. Traces of a city wall dating to the 5th and 4th century BC were found. Legends tell that the name Bitonto is connected to an Illyrian king named Botone. Later "Civitas Butuntinenses" became a self-governing Roman municipium,

In 1227, Bitonto was the scene of ex-communication of Frederick II accused by pope Gregory IX of having come to terms with the sultan al-Malik al-Kamil.

-
The Bitonto Cathedral, dedicated to San Valentino, was erected 1175/1200 in the centre of the city. The construction was probably influenced by the "Basilica of San Nicola" in Bari and was done in the typical "Apulian Romanesque" style.

It is proven that the bishopric existed in 1089, though the crypt of the cathedral has remains of a 5th-century church.

This capital, located on the right side of the nave, depicts Alexander the Great.

A legend in the Alexander romance had Alexander, wishing to see the whole world from above. To do this he harnessed two large birds (or Griffins) with a seat for him between them. To entice them to keep flying higher he placed meat (some say "roasted puppies") on two skewers which he held above their heads.
Suggested groups:
Comments