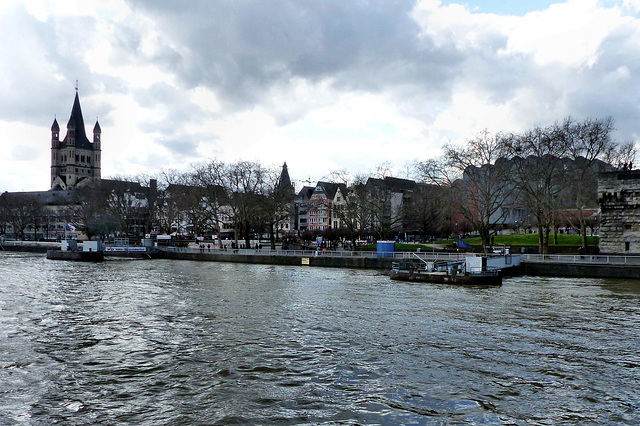 --
The founding of the church, erected on the ruins of a Roman temple, located on an island of the Rhine, is proven for the second half of the 10th century. Soon after a convent of Hiberno-Scottish missionaries was established. The Irish were replaced by local monks a century later.

At that time the relics of St. Eliphius were kept here, and as Archbishop Anno II (1056-1075) had a vision by St. Eliphius, who asked for a second tower, a tower was erected over the east choir.

In 1150, a fire destroyed much of Cologne. The abbey caught in the conflagration it is supposed that the entire Church was destroyed. The rebuilding started with the erection of a tri-apsidal structure. This is the only element of the church still present today, as a second fire hit the construction side in 1185.

In the middle of the 13th century, new walls for the three apses were completed, with larger windows. The nave was also made five meters longer, and the atrium in the west was built. The church got completed end of the 13th century. In 1378, a fire destroyed the roofs of the four towers and a storm in 1434 created more troubles. Three of the four gables of the towers were thrown down. Everything got repaired, but the unstable construction of a western flanking tower resulted in the destruction of it in 1527.

The French army occupied Cologne in 1794 and in 1802 the abbey at
Groß St. Martin was disbanded in 1802. The church became a parish church. Restoration of the neglected church started in 1843. In 1875 the church received a new roof, newly built western gables, a new window in the south wall, and finally, the completion of its two missing towers.

The church was badly damaged by aerial bombing during WWII. In 1942 the tower and nave burnt to the ground. The sacristy building and north apse were also destroyed. In January 1945 the triforiums of all three apses were destroyed, and the foundation of the central tower had sustained a direct hit.

After the war, it was debated whether the church should be restored, and how it should be restored. Should the church be left as a ruined memorial to the war? Or should it be fully restored? In spite of some scepticism, restoration work began in 1948. By 1954, the walls and supports for the apses of the church completely rebuilt. In 1971 the nave and the new roof were completed. When the interior restorations were completed in 1985, the church was opened to worshippers again. Since 2009 Groß St. Martin is being used by a branch of the Monastic Fraternities of Jerusalem and is open for visitors.