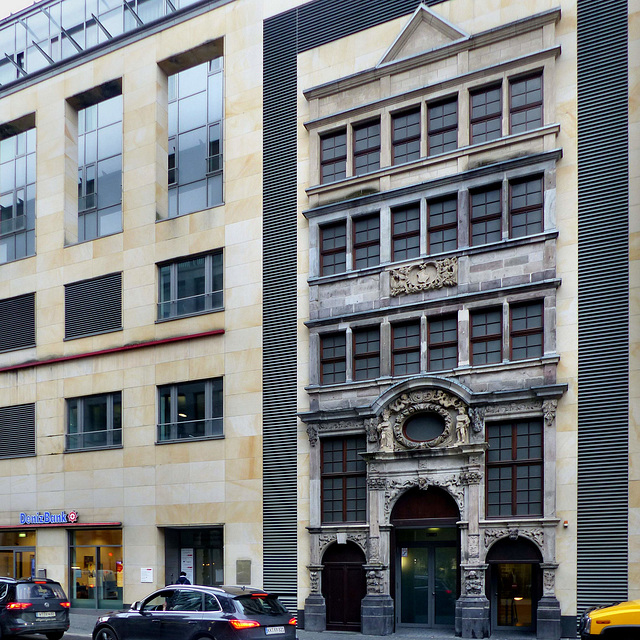 Cologne is the fourth-largest city in Germany - and one of the oldest. A Germanic tribe, the Ubii, had a settlement here, this was named by the Romans "Oppidum Ubiorum". In 50 AD, the Romans founded "Colonia Claudia Ara Agrippinensium", the city then became the provincial capital of "Germania Inferior".
--
During WWII Cologne was bombed in 262 separate air raids. The first-ever 1,000 bomber raid by the RAF (codenamed "Operation Millenium") was conducted on Cologne in May 1942. In April 1945, when the American army reached Cologne, the city was completely ruined. About 90% of all houses in the inner city were - gone. In 1939 Cologne had had a population of more than 700.00. In spring 1945 there were only about 40.000, living in the ruins.

This video shows parts of the destroyed city
www.youtube.com/watch?v=l_pQdzhdD50

--
The facade of the former "Haus zum Maulbeerbaum". The house was built in 1696 for a merchant. It got integrated into the new Stadthaus in 1913. Following the damage of WWII, it was restored without the upper story and the gable. Pulled down again together with the Stadthaus around 2000 it got integrated into the eastern facade of a new building on the "Kleine Sandkaul" in 2002. So only a part of the Baroque facade still exists.
Suggested groups:
Comments