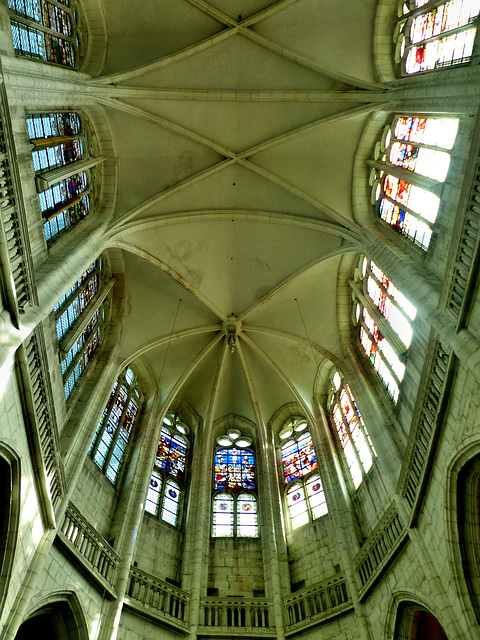 Saint Florentin was a small Gallo-Roman settlement. As it was located on the border of several provinces in early medieval times, it was taken by Visigoths, Francs, Burgondes, Francs and -of course by Normans in 886). It was English in 1356 during the Hundred Years War but was then retaken and completely destroyed by the Burgundians in 1359. Huguenots rampaged during the Wars of Religion in 1562.

Saint-Florentin is enclosed by the houses. The first church here, probably part of a fortified castle is from the 13th century. The erection of today´s church started on the hill, where once stood the castle, at the beginning of the 16th century. The construction was interrupted by the Wars of Religion and did not resume until the beginning of the 17th century. Well, the nave was never built, so today there is the choir and the transept. Due to the long time the construction took, the style is late Gothic plus some Renaissance.

As the church only has choir and transept it is kind of "short". In the centre a remarkable pretty complete rood screen. The vaulting of the choir. The stained windows were created from 1510 to 1525. At that time, Troyes was a centre of this art and scholars describe these windows as "Ecole Troyenne".

The friendly people in the "Office de Tourisme" gave me the key to open the church door. Merci beaucoup!