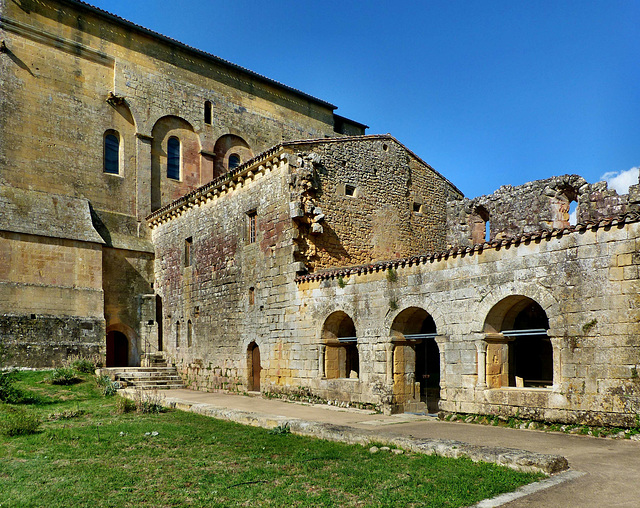 Legends tell, that a young aristocrat named Avitus was a member of the Visigoth army in the battle of Vouillé in 507. When he was a prisoner of the Franks, he converted to Christianity. Liberated he lived as a miraculous hermit, built a chapel and died around 570.

The chapel got destroyed by the Normans, but during the 11th century, a church was erected over his grave and a Benedictine convent was established. When the pilgrimage to Santiago took on, the reputation of Saint Avit let many "pelerins" on the Via Lemovicensis do a detour to visit the relics. So a larger church was built in the 11th and 12th century.

This is the massive, partially fortified church, seen today, next to ruins, that were then the convent of regular canons of Saint Augustine.

The village around and the church burned within the 13th century, but it is unclear whether English, French or Cathar troops did the damage. In 1280 French King Philippe III (le Hardi) ordered the fortification of the town. It did not help much, as later the English destroyed monastery village. During excavations of the cloister stone balls similar to those used for siege machines were found.

In 1577, during the wars of religion, Seigneur of Commarque´s troops entered the monastery, killed or imprisoned the canons, demolished the northwest bell tower and the chevet. The priory never really recovered and in 1695 the chapter of canons is deleted.

The church is about 56 m long and up to 20 m wide. The side walls have round Romanesque arches and in the beginning the ceiling may have been flat. Later in Gothic times the vaults were erected.

Once was the cloister next to the church. Traces of it can still be seen. For a while, the place was used for the communal cemetery.

Dimas Sequeira club
The evidence of the attack to the monastery is very well shown!
2 months ago. | Permalink