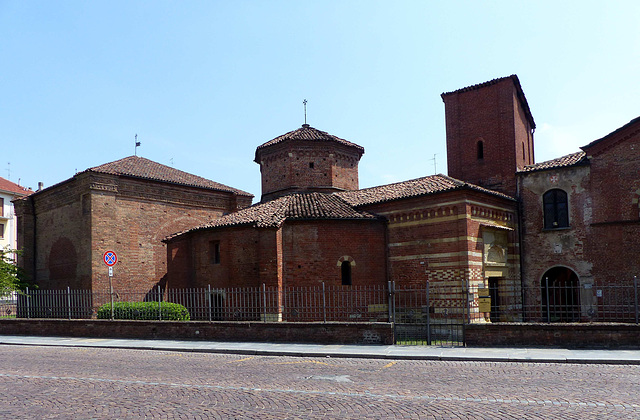 A city named "Hasta" evolved from a Roman camp and received the status of a "municipium" in 49BC.

After the fall of the Western Empire and the invasion of the Visigoths, the importance of the city declined.

In 774 the Franks conquered Northern Italy and in the late Carolingian age Asti was ruled directly by the bishops, who were the main landlords of the area.

The bishopric of Asti remained a powerful entity well into the 11th century, when Pietro II received privileges by emperor Henry II. In the second half of the century, Bishop Otto tried to resist the aims of the powerful countess Adelaide of Susa, who damaged the city several times. During Otto's reign, a commune and the consul magistrates are mentioned for the first time (1095) and make this City-State the first republic of Europe. In 1140 Asti received the right to mint coins of its own by Conrad II.

As the commune, however, had begun to erode the lands of the bishop, he sued for help to Frederick Barbarossa, who arrived with a huge army in February 1155. After a short siege, Asti was stormed and burnt.
Subsequently, in 1169 Asti adhered to the Lombard League against the Barbarossa, but was again defeated in 1174.

The following century Asti saw the peak of economic and cultural splendour, trying to gain control over the trade routes leading northwards from the Ligurian ports. This period resulted in conflicts between Guelph and Ghibelline supporters. During the wars led by Emperor Frederick II the city chose his side. Asti was defeated by the Guelphs, but thanks to Genoese help, it recovered easily. After Frederick's death, the struggle against the Ghibelline House of Savoy became fierce, what after the "Battle of Montebruno" (1255) led to the intervention of Charles I of Anjou, then King of Naples and the most powerful man in Italy. Asti and its allies were victorious over the Angevins at the Battle of Roccavione (1275), ending Charles' attempt to expand in Piedmont.

-
"San Pietro in Consavia" is also named "Complex of the baptistery of San Pietro" as it is consisting of four buildings dating from the 12th century to the 14th century.

The "Rotonda del Santo Sepolcro" was planned already around 1000 as a copy of the "Church of the Holy Sepulchre" in Jerusalem for those who could not travel to Palestine and could therefore follow a local pilgrimage.

It was completed in the 12th century - and unfortunalety was locked, when I visited.

Remarkable old church! Thanks for sharing so much information.
19 months ago. | Permalink