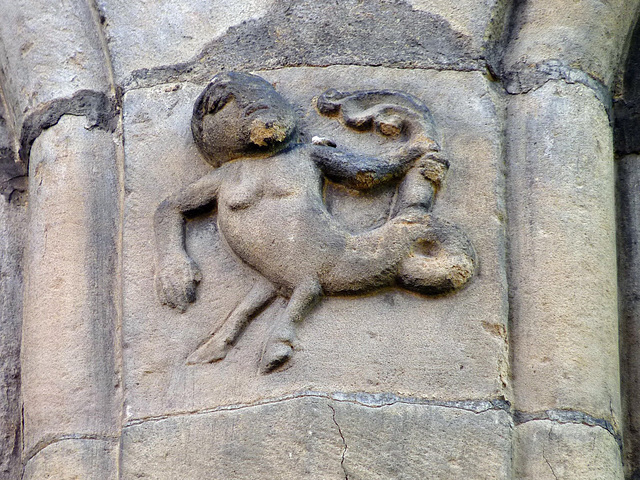 The construction of the "Église Saints-Pierre-et-Paul", using the local pinkish sandstone, started around 1150. The gothic-style crossing tower was added around 1300. The basilica-sytle church has the classical layout of a latin cross and is known for the carvings. Though some of these got damaged during the French Revolution, most of them are still in place.

Size and the quality of some of them is really breathtaking. The architecture of this church is sometimes compared with a medieaval reliquary-shrine - and there are analogies indeed, but I see parallels as well to churches in the Lombardy.

When in 1622 a troop of mercenaries led by Peter von Mansfeld burnt down the whole village of Rosheim, this building was the only one, that survived. A legends tell, that it was defended by angels.

Another carving from the outside walls. Mythological centaurs are a composite race of creatures, part human and part horse. Normally.

Here the artist combined more parts. The upper body is human, the front of the lower body originates from a horse - the rear part from a snake. ending in a tail that bears leafs.
Running around for this guy, balancing on only two feet, must have been quite a challenge.
Suggested groups:
Comments