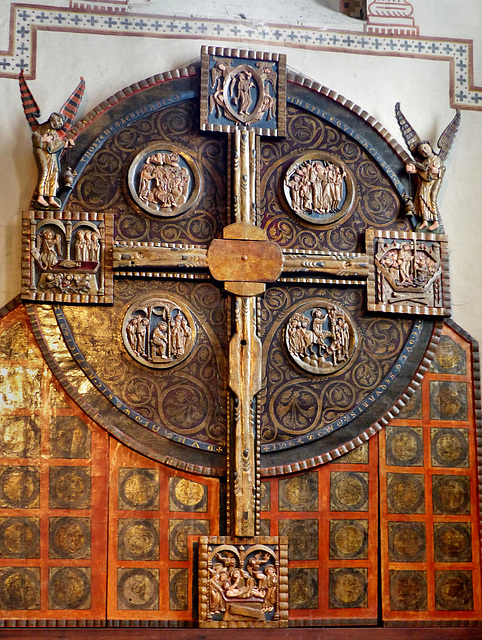 Soest has still a couple of wonderful medieval, Romanesque churches, built with the regional greenish sandstone. The "Hohnekirche" (officially "St. Maria zur Höhe") is one of them. The church was built in its present form from 1180 and is one of the oldest hall churches in Westphalia. It replaced an older church here.
This giant triumph-cross is a very unique piece of art here. This "Scheibenkreuz" ("plate cross"), created ~1200, is the only one in "mainland" Europe and the oldest. Something similar can be found almost only on the island of Gotland in Sweden. However, these crosses are younger.

Here nail marks exist, so originally Christ body was nailed to the cross. The plate cross, made of spruce and pine, has a height of 3.89 m and diameter of 2.72 m.

Soest has had a very strong position within the Hanse League so there were for sure ties to Northern Europe, where this cross may have been created. A recent renovation prooved, that the wood originated in Northern Europe.