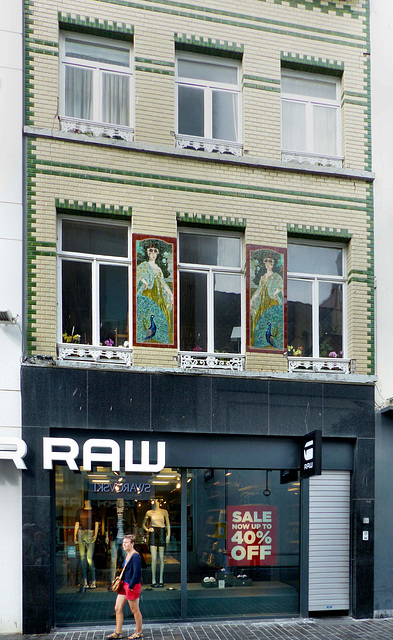 Since 1265 Ostend is known as a "town". It was located at the "eastern end" of an island, named Testerep. As the coastline was pretty unstable, a new Ostend was founded futher inland, behind dikes.

Ostend was frequently taken, ransacked and destroyed by conquering armies. The Dutch Gueuzen took control of the town. The following siege (1601 to 1604) by Spanish troops ended in the bloodiest battle of the Eighty Years' War, costing more than 80.000 dead or wounded.

When, after the War of the Spanish Succession, Ostend belonged to the Austrian Empire, Charles VI founded the "Oostendse Compagnie" in 1722, that had a trade monopoly with Africa and the Far-East and was allowed to found colonies overseas. But only five years later the "Compagnie" was forced to stop its activities because of Dutch and British pressure.

Since Belgium existed in 1930 Ostend prospered. In 1838 a railway connected the twon with Brussels and Ostend became a transit harbour to England.

Belgian kings Leopold I and Leopold II liked to spend their holidays here and the aristocratic Belgium followed. Posh villas were built and by end of the 19th century Ostend was known as "the queen of the Belgian sea-side resorts".

Ostend was an elegant "Belle Epoque Town. This ended in WWI and WWII, as both wars brought destruction to Ostend. This devastation plus the rise of mass tourism in the 1960s and 1970s changed the architecture of Ostend.

Many of the old historical building, dating back to the "Belle Epoque", have "lost" their ground floor when shops moved in or existing ones got modernized. Sometimes these conversions lack sensibility.

Evangrek63 has particularly liked this photo