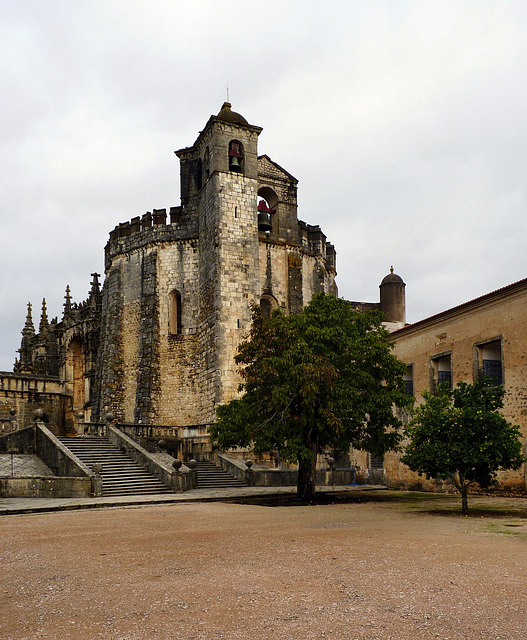 Tomar today is a modern city with a population of about 40.000.

After the conquest of the area from the Moors by Portugal´s first king Afonso Henriques in 1147, the land was granted in 1159 as a fief to the Order of the Knights Templar, who erected the castle/monastery "Convento de Cristo" here, that later became the headquarters of the Order in Portugal.

Gualdim Pais, Grand Master of the Order, granted priviliges to the evolving town already in 1162. After the Order of the Knights Templar was suppressed in 1314 King Dinis was able to transfer the possessions and personnel of the Order in Portugal to a newly created Order of Christ. In the 15th century Henry the Navigator was made the Governor of the Order. He was the central figure in the early days of the European maritime discoveries and maritime expansion, later known as the "Age of Discovery", and he may have used resources and knowledge of the Order to succeed in his enterprises in Africa and in the Atlantic.

In 1492 the Jews were expelled from Spain. Many refugees settled in Tomar, what helped the town to develop. Jews lived here undisturbed for several decades until the Portuguese Inquisition got installed. Many could escape by migrating, but about 1000 were tortured and executed.

Tomar was occupied by the French during the Napoleonic invasions and was liberated by Portuguese and English troops commanded by the Duke of Wellington.

The "Convento de Cristo" towers over Tomar. The church of the convent has a nave, erected in flamboyant Gothic "Manueline" style around 1510 - and this 12th century 16-side polygonal structure, constructed, when Gualdim Pais led the Knights Templar in Tomar. He had joined the Second Cruisade and fought for five years as a Knight Templar in "Outremer", the Crusader states. He probably brought back the blueprint of this rotunda, obviously modelled after the Church of the Holy Sepulchre in Jerusalem.
Suggested groups:
Comments