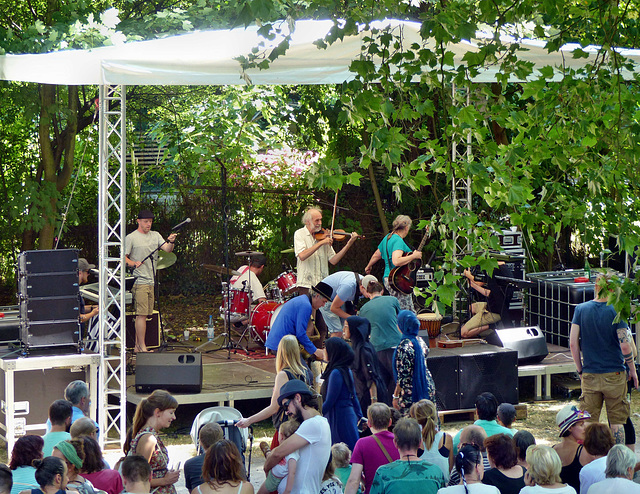 The "Edelweisspiraten" (Edelweiss Pirates) were a loosely organized group of youth, opposing the paramilitary nature of the "Hitler Youth" in Nazi Germany. During the war, many Edelweisspiraten, most of them between 14 and 18 years old, supported the Allies and assisted deserters from the German Army. Of course the Nazis responded. In 1944 a group of thirteen people, the heads of the Ehrenfelder Gruppe, were publicly hanged in Cologne. Nevertheless, the repression never managed to break the spirit of the Pirates, which constituted a subculture that rejected the norms of Nazi society.

As music was very important for the Edelweisspiraten, the Festival named after them is a kind of living memorial, honouring the brave, nonconformistic youths.

About 20 bands perform in different stages in the Friedenpark.

"Klaus der Geiger" has entered the stage and is tuning his violin.

Since the 1970s "Klaus der Geiger" ("Klaus the violinist") is known as a politically engaged musician. He is probably the best known street musician in Germany.