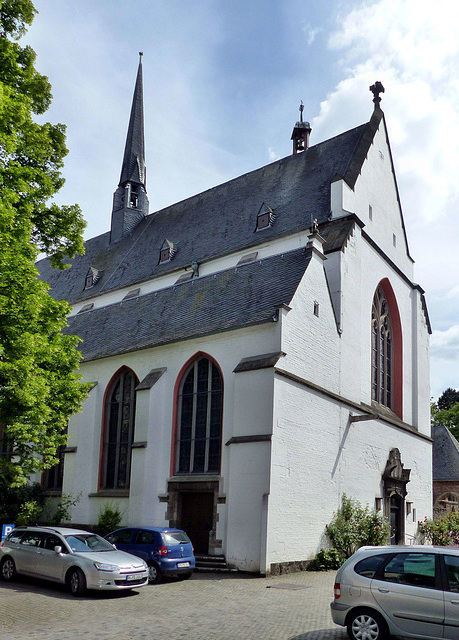 The "Kölner Kartause", a Carthusian monastery was founded in 1334 by Walram of Jülich here. At that time more than 100 Carthusian monasteries existed in Europe, but this was the first in the town, where Saint Bruno, founder of the Order was born. The monastery developed into the largest Carthusian convent in Germany and existed until 1794, when the invading French troops forcely dissolved it.

The church and the buildings were used as storage rooms by the French troops and as a militrary hospital, when the Prussians had annexed the "Rhine Province". It was used that way until 1923, when the church an parts of the former monastery buildings were given to the Protestant Church.

After WWII, the mostly destroyed complex got rebuilt. The church, erected mid 14th century and the dedicated to St. Barbara, is locked most of the time. I could slip in one time, just after the service had finished and tried to take one (!) interior shot, but was immidiatly approached by an unfriendly lady, telling me, that I had to leave "right now!" - and when I asked for 10 seconds, to just take one.... - NO!

This was the only such experience I had in Cologne - ever.
Translate into English