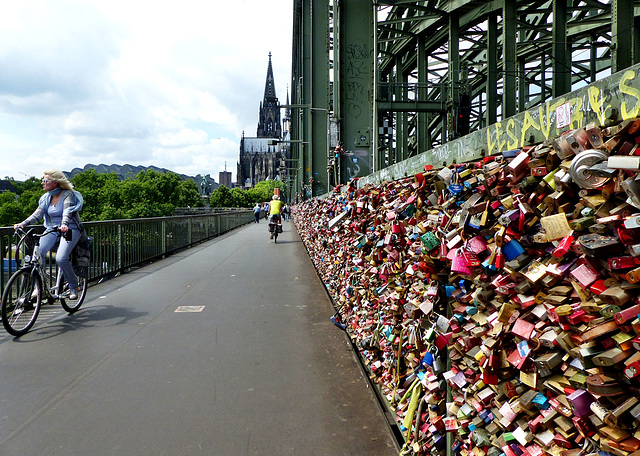 The Hohenzollernbrücke (Hohenzollern Bridge), constructed between 1907 and 1911, is named after the House of Hohenzollern, rulers of Prussia and German Emperors. At the time, Cologne was part of the Prussian Rhine Province. It was inaugurated in 1911 by Kaiser Wilhelm II.

The Hohenzollernbrücke was an important bridge during WW II. In March the German armee blew up the bridge as Allied troops began their assault on Cologne. The bridge got repaired, rebuilt and was completed again in 1958.

About 1200 trains cross the Hohenzollerbrücke every day - and many young couples! In 2008 the first "love locks" were found here, meanwile here is a wall of "love locks". It is estimated, that way more than 40.000 locks add more then 15 tons of weight to the bridge, but sofar there is no danger to the bridge´s statics.

In the backdrop - the Dom.
Suggested groups:
Comments