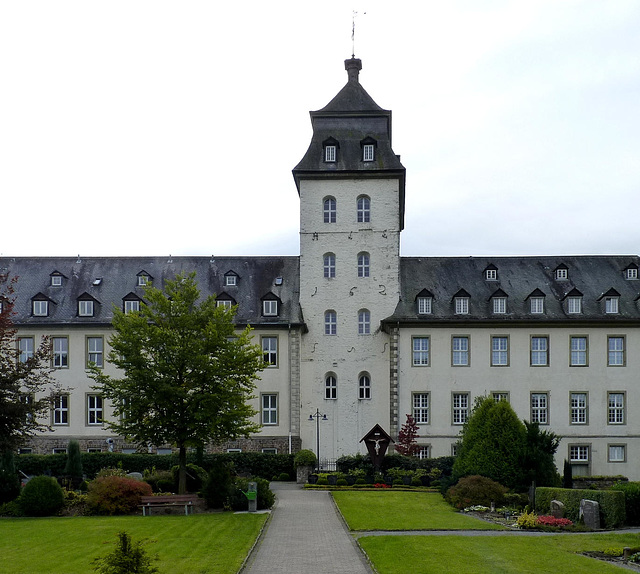 The village of Grafschaft, now part of larger Schmallenberg, developed around a Benedictine monastery, founded by Saint Anno, Archbishop of Cologne in 1072. The first monks settling here came from Siegburg, where Anno had established an abbey some years before.

As Anno had interfered into the existing balance of power and as he tried to extend his influence, already in 1114 the Grafschaft abbey was raided by troops, led by Giso IV, Count of Gudensberg. It was severly damaged.

The abbey recovered and prospered again, but moral and economy declined in the 15th century, so that in 1508 the abbey joined the Bursfelde Congregation, to reestablish a Beneditine monastic life. A economic revival was triggered, when the monks "invested" into smelters and hammer mills instead of agriculture.

All existing convent buildings were demolished and got replaced between 1729 and 1770 in Baroque style. Only the tower of the Romanesque church (seen here) still exists. The Barroque church (behind the tower) was in ruins and got demolished in 1833,

The abbey was dissolved in 1804 as a consequence of secularisation. The premises were privatly sold. After WWII Borromäerinnen ("Sisters of Mercy of Saint Charles Borromeo"), who had been expelled from Silesia, settled here. Meanwhile a large part of the complex now hosts as a hospital.