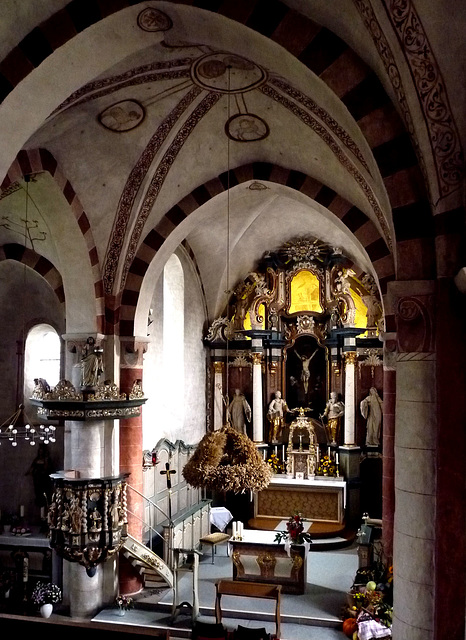 Wormbach is just like neighbouring Berghausen part of Schmallenberg.
The romanesque parish church of Wormbach dates back to the 13th century.

The parish of Wormbach is one of the oldest in the Sauerland area. A legend tells, that St. Bonifatius himself (or -maybe- one of his followers) built the first chapel in Wormbach, what would mean - around 750. Excavations, undertaken in 1908, found the foundations of a small 8th century-basilica. This was a hub of early christianisation. All of the those places that were important during the Christianisation in die area (eg Balve, Hellefeld, Stockum, Huesten) probably had some ritual importance already during pagan times. But it is Wormbach, where strange, esoteric and sometimes weird theories found their center.

This interest was mainly triggered, when in the mid 1950 the signs of the zodiac where found under the layers of plaster. The signs have been painted in the 13th century.

To be buried in Wormbach had a strong attraction already in very early times. Still in medieval times, dead bodies have been carried over long distances, to be buried right here in Wormbach. Old maps show a net of little paths ("Totenwege"), that all run to - Wormbach.
Suggested groups:
Comments