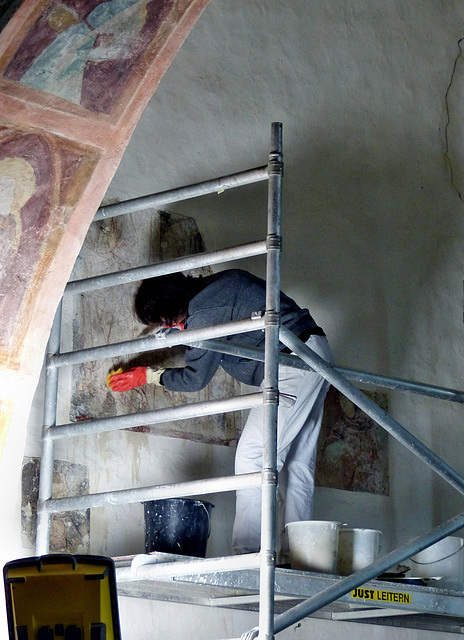 Hemma of Gurk donated a chapel in "Grivinne" in 1043. The chapel belonged to the chapter of the Gurk cathedral in 1157 and around 1218 was the parish church Deutsch-Griffen.

The Romanesque structure was rebuilt as a fortified church in the 15th century, when it served as a refuge for the villagers during the Turkish incursions. Since then it is surounded by a wall. The Karner (ossuary) erected in the 14th century was used as a defense tower duirng that time.

Inside the church are some extraordinary frescoes, that were "re-discovered" under plaster in 1928. Most of them were created by a studio named "Villacher Schule", that existed from around 1440.

Some in a bad state conditions. The conservationist is working with painstaking care inside the freezing cold church. A hard job! Thank you!!
Suggested groups:
Comments