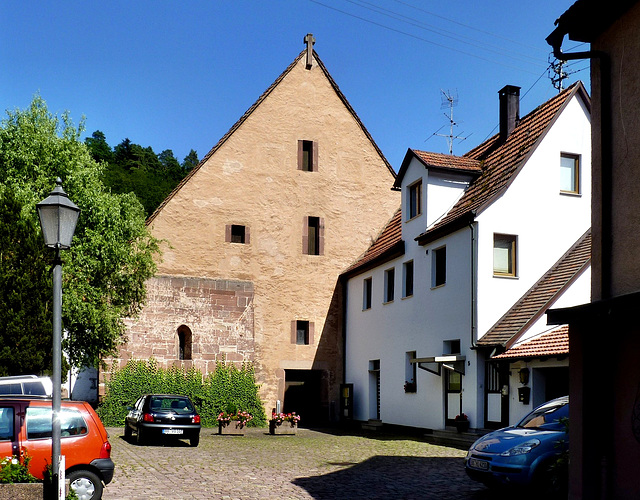 A monastery was founded in Hirsau about 830 at the instigation of Bishop Notting of Vercelli (Piedmont/Italy), who gave it the relics of Saint Aurelius. The first monks, disciples of Rabanus Maurus and Walafrid Strabo, came from Fulda Abbey. The first church on this place, dedicated to St. Aurelius, was completed around 10 years later. The monastery prospered for about 150 years, before plague, greed, rivalry and laxity ruined it completely.

In 1049 Pope Leo IX, uncle of local Count Adalbert of Calw, came to Hirsau, and asked his nephew to restore the abbey. So Adalbert had the abbey church rebuilt, but the renovation took very long. Already in 1092 the monks moved out here - and into the new Sts Peter and Paul Abbey, not even a mile away.

The abbey buildings again fell into ruins and most got demolished after the Reformation. The church seen here is only a torso. It has been used as a stable, barn even a gymnastic hall, before it got renovated and since then serves as a church again.
Suggested groups:
Comments