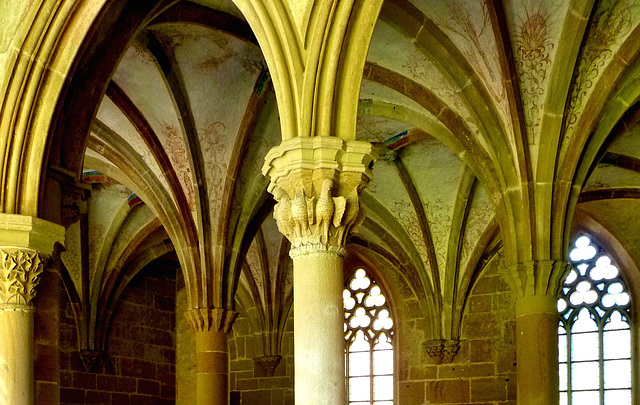 Maulbronn Monastery was founded in 1147. The church, built in a style transitional from Romanesque to Gothic, was consecrated in 1178. Most other buildings followed within the 13th century. The complex is believed to be one of the the best-preserved medieval Cistercian monastery complex north of the Alpes (some claim "in Europe"). Since 1993 Maulbronn is part of the Unesco World Heritage.

After the consecration, the construction of the abbey continued. Around 1200 the narthex was added and the cloister was started. Some buildings are done in a really remarkable architectural, early gothic style. The person, who built that must have had experiences from Northern France and Burgundy. With all the cistercian connections, it was probably easy to find a medieval "top architect". His name is not known. The name given to him by art historians is "Meister des Maulbronner Paradieses" (Master of Maulbronn Paradise).

He created not only the narthex ("Paradies"), but as well parts of the cloister and the refectorium. After completing his job in Maulbronn he turned northeast. His typical works can be found as well in Halberstadt and in Magdeburg, but here is, where he started his career in Germany..

Within the cloister, it is visible, where "Meister des Maulbronner Paradieses" planned and built, as there (near the church) is a very early gothic style. Walking from there the style of the arches changes to high gothic.

Another look onto the impressing vaulting of the chapter house. Some of the capitals are nicely carved. That one in the center has birds all around.
Suggested groups:
Comments