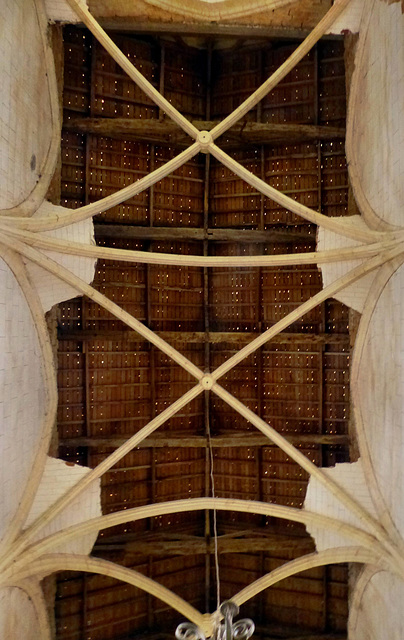 Saint-Martial is the church of a former abbey, that may be the oldest in the Périgord. Local traditions tell, that the abbey was founded by Saint Cybard (aka "Cybard d'Angoulême") within the 6th century. Documents prove an existence in Carolingian times. Norman raiders devastated the abbey in 849 and in 860, monks returned some decades later and rebuilt.

During the heydays of medieval pilgrimage one of the many "chemins" to Santiago run through this valley, so this was a welcomed stop over for the "pelerins".

The abbey suffered severely during the Hundred Years War, the nave of the church had to be rebuilt within the second half of the 15th century. The Wars of Religions caused more damage, when the abbey got looted by Protestant troops. The French Revolution finally put the monastic life to an end.

Todays church may date to the 12th and 13th century, but many parts were added and rebuilt in later centuries. The long nave is one of the "younger" parts - and of course these elegant vaults.

rod bally club
Beautiful shot! I love these church vault photos, because they are so organic and yet abstract (I've got two in my own gallery)!
4 years ago. | Permalink

Sonja
A funny sight, such a skeleton of a vault with the arches in place but the filling gone. I never was in a church where they preserved it open like that.....
4 years ago. | Permalink

Martin M. Miles club
You are right, Rod.
These vaults are beautiful. Like graphs.
Mathematics and Gothic architecture....
4 years ago. | Permalink