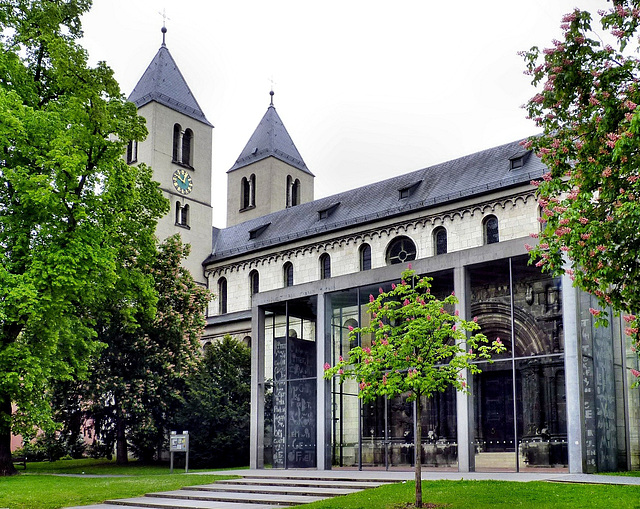 A Benedictian monastery was founded by Hiberno-Scottish monks in Regensburg already around 1070. Soon after, the convent moved to a place just outside the city walls and in started to erect first buildings.

The first church, consecrated in 1120, was of such a poor workmanship, that the convent decided to tear it down (except one apse and the flanking towers) and restart the process. The church seen today was completed before 1200. It is one of the most important Romanesque structures in Bavaria. The northern portal (seen in a protective "aquarium" here) was done by irish masons during the 13th century.

WHile the first monks and abbots were Irish, the Scottish period started after the Reformation with Scottish abbot Ninian Vincet (1577-1592). A century later Scottish priests were educated here to do missionary work back in Scotland.

Abbot Benedikt Aburthnot (1737-1820) could avoid the secularisation in 1802 by making clear, that the monastery was a Scottish (not at all Bavarian!) national treasure. It took upto 1814 to incorporate the Scottish monastery into the Bavarian sovereignty. Monastic life finally ended here in 1862, when the buildings were taken over by the bishop, who 10 years later founded a still existing seminary here.