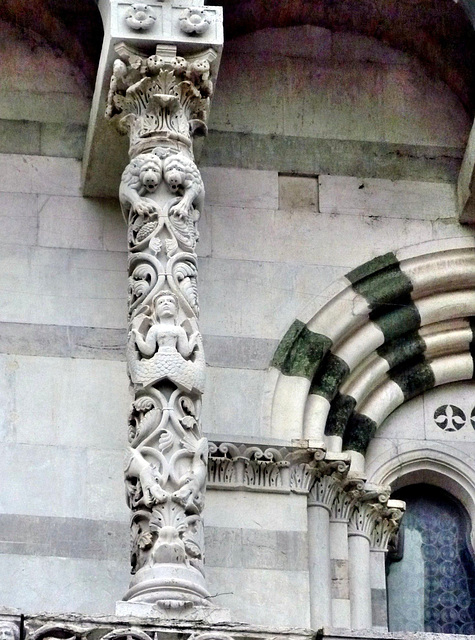 Lucca existed already in Etruscan times and became a Roman colony in 180 BC. The Diocese of Lucca dates back to the first century, legends tell, that St. Paulinus, a disciple of St. Peter, was the first Bishop of Lucca. In medieval times Lucca was the residence of the Margraves of Tuscany. After the death of Matilda of Tuscany (1115), Lucca constituted itself as an independent republic. Actually the "Republic of Lucca" existed from 1160 to 1805.

The Cathedral of Saint Martin is the seat of the Archbishop of Lucca. The construction of the cathedral started in 1063, when Anselm (later Pope Alexander II) was bishop here.

The western facade was begun in 1204 by Guido Bigarelli, who later sculpted (and signed!) the the octogonal baptismal font in the center of the Pisan Baptistery. He is one of the many gifted artists, that came from the area around the Lake Como and are known as "Comacine masters".

The facade consists of three arches. Above the portico are three open galleries adorned with sculptures and carvings.

This pillar is up on one of the galleries. The very symmetrical design includes to lions - and a large mermaid
Suggested groups:
Comments

Some of the pillars seem similar to French trumeaus (eg Moissac). Or the pillar in Freising.
6 years ago. | Permalink