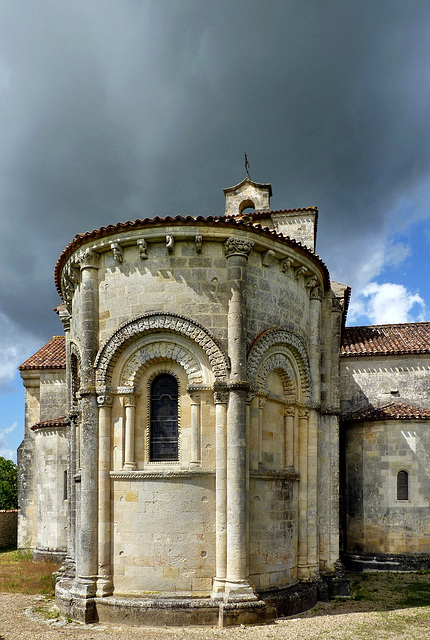 There had been a small community of monks here, that end of the 11th century joined the important Benedictian Abbaye royale of Saint-Jean-d'Angély (20kms northwest), that was part of the cluniac network.

The Abbaye royale got wealthy through the thousands of pilgrims on the Via Turonensis. They all stopped to see the relic of John the Baptist, before they continued, and obviously left some coins.

The abbey could afford to build a prestigious abbey church for the monastic comunity in Marestay (now Matha) at the same time, when Saint-Hérie (see previous uploads), just 2kms apart from here, was erected. Probably the same monks, lay brothers and workers toiled on two construction sides in long double shifts.

During the Wars of Religion many curches within the whole area got ruined and mutilated. In Saint-Herie, 2kms south, only two walls of the Romanesque church are still in place. Here the complete nave is missing.

After the "Edict of Nantes" got revoked in 1685, all Huguenots living in Matha were evicted and exiled. Following that all protestant churches existing in the town got leveled to the ground.

The only parts of Saint-Pierre that survived the incredible fury are the transepts, the crossing and the apse (seen here). Despite this structure is really "short", there is a lot to find, as most elaborate carvings around the apse are untouched.

Gooner67 has particularly liked this photo