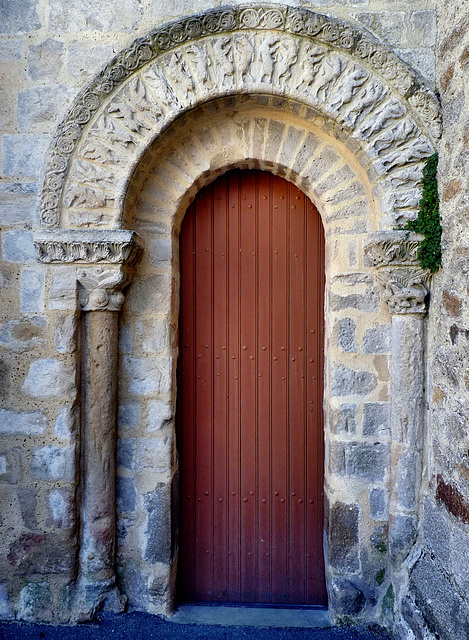 Parthenay is a very well fortified town, sited on a rocky spur, surrounded by the River Thouet. It has a (now ruined) castle inside and is known since the 11th century. Many pilgrims, following a branch of the Via Turonensis passed through here. The main gate of Parthenay, where the pilgrims entered the town, still bears the name of Saint Jaques.

The church Sainte-Croix dates back to the 12th century, founded by Ebbon, Seigneur of Parthenay, when he returned from the cruisade. Since then a particle of the legendary True Cross, once discovered in the Holy Land by Empress Helena, was one of the treasures kept here. That is why the many pilgrims walked the detour via Parthenay.

The church got rebuilt, renovated and remodeled many times. It was a Collegiate Church for a while.

This small portal, decorated with a griffon-archivolt, is about the last remaining part of the old structure, I found outside.
Suggested groups:
Comments