SEEN IN SEEN IN 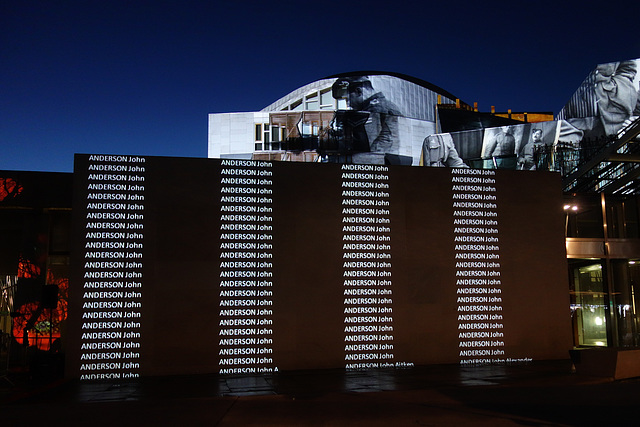 The names of the 134,712 men and women listed in the Scottish National War Memorial Roll of Honour are currently (Sunday 11th November) being projected onto the wall of the Scottish Parliament in Edinburgh, with each name appearing on the wall for about 10 seconds. The projection includes names of Scottish servicemen, munitions factory workers, Merchant Navy personnel, and overseas servicemen who fought on behalf of Scotland during the war. The screening began at 5pm and will finish at midnight.
It is currently being shown live on www.scottishparliament.tv

I was particularly struck by moments such as this, when virtually the entire wall is filled with a single name - in this case John Anderson, such a common name in Scotland. Each of these John Andersons was an individual, from a village or from a city, from the mainland or from an island, with family and friends and a story of his own.

Superb shot and incredible capture of so many John Anderson's! Glad you made it a point so people would remember their individual lives and the families and friends who loved each one of them.

Admired in:
www.ipernity.com/group/tolerance
2 years ago. | Permalink
Rabbitroundtheworld
has replied to William Sutherland club

Thanks William. There will be quite a number of Sutherlands projected on the wall within the next half hour or so.
2 years ago. | Permalink

A very powerful image and your notes say it all!
2 years ago. | Permalink

A poignant and well taken image and a lovely narrative. Thanks for sharing this with us ;-)
2 years ago. | Permalink

Impressive !
Thanks for sharing.
2 years ago. | Permalink