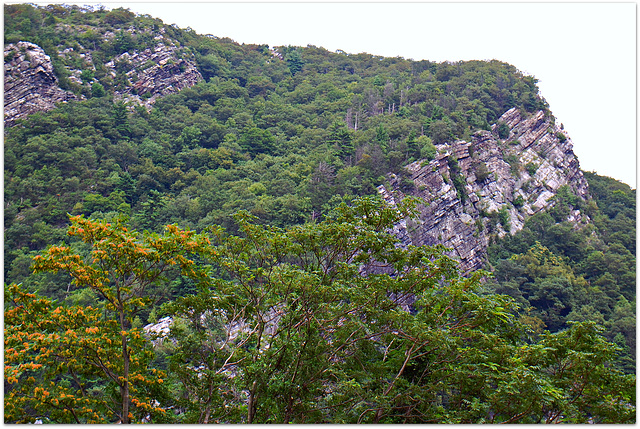 A water gap is a geological feature where a river cuts through a mountain ridge. The Delaware Water Gap began to form 450 million years ago when quartz pebbles were deposited in a shallow sea, on top of the Ordovician Martinsburg shale. The Martinsburg Shale was uplifted when a chain of volcanic islands collided with North America around the same time. These islands went over the North American plate, and deposited rock on top of plate, forming the Highlands and Kittatinny Valley.

Then around 400 million years ago, a small, narrow continent collided with North America. Pressure from the collision twisted the Silurian Shawangunk Conglomerate, shattering the gray quartzite as it was uplifted. In addition, the pressure created heat, melted the quartzite, and allowed it to bind the quartz pebbles and conglomerate together. This layer was then uplifted, and the Delaware River slowly cut its path down through the shattered quartzite. If the quartzite had not been cracked, the river may not have been able to cut its path through the mountain.

Millions of years of rain, ice, snow and wind erosion shaped the area. The Wisconsin glaciation, which occurred between 21,000 B.C. to 13,000 B.C., covered the entire Kittatinny Ridge and ended near Belvidere.When the glaciers retreated, the gap assumed its present form.

Juan has particularly liked this photo

I am a Modern artist dying of Modernism - Robert Smithson

FROM THE MUSEUM OF FORGETTING. With its simple piles of traprock and its date of 1968, this installation is in part Robert Smithson’s en.wikipedia.org/wiki/Robert_Smithson response to the emotive “action painting” of the 1950s. at the same time, by calling the work of a “non-site” and by putting a little map on the wall, Smithson indicates that the true site of the work is not in the gallery or the museum but on the Palisades, along the Hudson River in New Jersey. In setting up the contrast between the culture and non-site and the geological true-site, Smithson opens an inquiry into how we think of time. New Jersey traprock is a Triassic diabase intrusion laid down over 200 million years ago, a span of time within which the era of abstract expressionism and the year 1968 are vanishing markers.

Geological time offered Smithson refuge from the time of art history. Absent such sanctuary, he believed, artists too often find themselves submerged in a historical narrative written by the critics and museums, not by artists. “The remnants of art history,” he wrote, float “in [a] temporal river.” And “the deeper an artist sinks into [that] time stream the more it becomes oblivion.” Better to forget about art history than to drown in its so-recent waters and be yourself forgotten. ~ Page 276

Excerpt: "A Primer for Forgetting" ~ Lewis Hyde
2 years ago. Edited 2 years ago. | Permalink