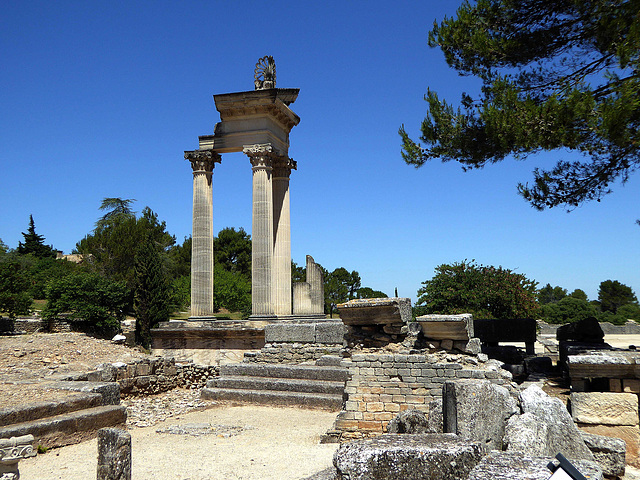 Glanum (Hellenistic Γλανόν, as well as Glano, Calum, Clano, Clanum, Glanu, Glano) was an ancient and wealthy city which still enjoys a magnificent setting below a gorge on the flanks of the Alpilles mountains. It is located about one kilometre south of the town of Saint-Rémy-de-Provence.

Originally a Celto-Ligurian oppidum, it expanded under Greek influence before becoming a Roman city. As it was never built over by settlements after the Roman period but was partly buried by deposits washed from the hills above, much of it was preserved. After 17 Centuries, many of the impressive buildings have been excavated and can be visited today.

It is particularly known for two well-preserved Roman monuments of the 1st century BC, known as "Les Antiques", a mausoleum and a triumphal arch (PiP public)

Explored
Do not use my images on websites, blogs or other media without my explicit written permission.
All rights reserved - Copyright © Nora Caracci

Pat Del, buonacoppi, vero, tiabunna and 27 other people have particularly liked this photo

Seems to be an restored columns of twin Corinthian temple in first Roman Forum of Glanum...
4 weeks ago. | Permalink
Nora Caracci club
has replied to ©UdoSm club

Impressive ruins; thank you for the note.
Looks indeed like the Greek ruins.
4 weeks ago. | Permalink

A breath of history ! Excellently taken, Nora !
4 weeks ago. | Permalink

A piece of history beautifully captured Nora.
4 weeks ago. | Permalink

Admired in: www.ipernity.com/group/tolerance
4 weeks ago. | Permalink

Lovely images of these ruins, Nora.
4 weeks ago. | Permalink