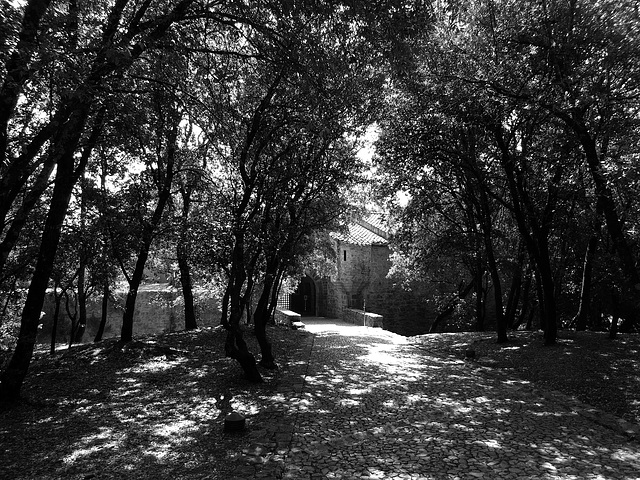 Thoronet Abbey (French: L'abbaye du Thoronet) is a former Cistercian abbey built in the late twelfth and early thirteenth century, now restored as a museum. It is sited between the towns of Draguignan and Brignoles in the Var Department of Provence, in southeast France. It is one of the three Cistercian abbeys in Provence, along with the Sénanque Abbey and Silvacane, that together are known as "the Three Sisters of Provence."

Thoronet Abbey had a significant influence upon the Swiss architect Le Corbusier Following the Second World War, Father Couturier, a Dominican priest and artist, who had contacts with contemporary artists Marc Chagall, Fernand Léger, Henri Matisse and Pierre Bonnard, invited Le Corbusier to design a convent at La Tourette, close to Lyon. Father Coutourier wrote to Le Corbusier in 1953: "I hope that you can go to Le Thoronet, and that you will like that place. It seems to me that there you will find the essence of what a monastery must have been like at the time it was built; a place where men lived by a vow of silence, devoted themselves to reflection and meditation and a communal life which has not changed very much over time." Le Corbusier visited Thoronet, and wrote an article about his visit, including the observation, "the light and the shadow are the loudspeakers of this architecture of truth." The convent that he eventually built has a number of features inspired by Thoronet, including the tower and the simple volumes, and the alternating full and empty spaces created by bright light falling on the walls.

Explored
Do not use my images on websites, blogs or other media without my explicit written permission.
All rights reserved - Copyright © Nora Caracci

Gorgeous play of light and shadow.
Healthy sunny week ahead.
4 months ago. | Permalink

Beautiful and the black and white captures nicely the light and gives a sense of age.
4 months ago. | Permalink

Admired in: www.ipernity.com/group/tolerance
4 months ago. | Permalink

"The light and the shadow are the loudspeakers of this architecture of truth"....
Seems, this principle was not only applied within the building.
As a b/w photo, it is shown to great advantage here!
4 months ago. | Permalink