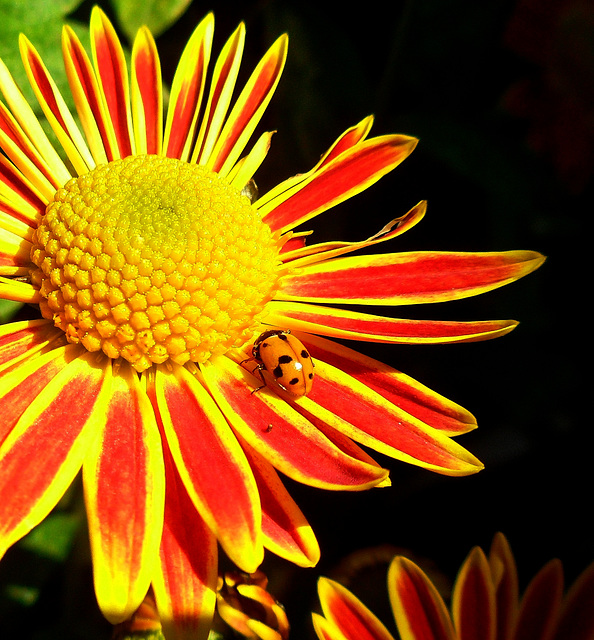 the flower is a Chrysanthemum X morifolium
the insect is a Coccinella novemnotata, Nine Spotted Lady Beetle (thanks Fizzie !)
The nine-spotted ladybug can be identified by the presence of four black spots on each of its elytra, a single spot split between the elytra, and a black suture between the elytra. Its pronotum is black, with two connected white marks at the front.
A curiosity: The nine-spotted ladybug has been the state insect of New York since 1989, though its numbers have declined as the numbers of introduced species such as the seven-spotted ladybug and Asian lady beetle have increased. It was for some time thought extinct in New York, so in 2006, the state considered designating the pink spotted ladybug as state insect instead, but the bill did not pass the Senate. In 2006 the nine-spotted ladybug was rediscovered in Virginia (the first East Coast sighting in 14 years). In 2011, about 20 of these ladybugs were found on a farm in Amagansett, NY, the first such sighting in New York since 1982.

(originally posted in 2013)
Do not use any of my images on websites, blogs or other media without my explicit written permission.
All rights reserved - Copyright © Nora Caracci

xenophora, Nouchetdu38, Nitro76, Cheryl Kelly (cher12861 on flickr) and 65 other people have particularly liked this photo

Suggested groups:
54 comments - The latest ones

What a super shot! Bright and beautiful! I love the lady bug! Happy weekend!
8 years ago. | Permalink

That is beautiful :)
8 years ago. | Permalink

Very beautiful close-up!
I am quite ignorant in the flora world, just also posted an unidentified flower photo.
8 years ago. | Permalink

My guess on the ID is that it is a Gazania.
8 years ago. | Permalink

The ladybug looks to be a Nine-Spotted Lady Beetle with its 4 black spots on each wing and one central spot spanning both wings....

Beautiful light and colors and an adorable ladybug =)
8 years ago. Edited 8 years ago. | Permalink
Nora Caracci club
has replied to Fizgig

thanks a lot ! and I learned something very interesting about this beetle !
8 years ago. | Permalink
Fizgig
has replied to Nora Caracci club

Yep.... They are interesting... They're pretty rare here now. I did see one in my garden this year -- but that's for the first time in 5 yrs. I do have a lot of other ladybugs in the garden, though. I think part of the reason for the decline, which scientists seem hesitant to mention, is the increased use of insecticides to control mosquitoes due to the West Nile virus.... I firmly believe our sharp decline in wild birds & butterflies can also be attributed to the widespread spraying by the local governments (besides people killing things in their own gardens out of irrational fears). It's a shame, really... If we worked as hard to maintain the balance of wildlife rather than kill off certain species, we'd be so much better off. The birds found in the city, especially, are voracious consumer of virtually all insect species.... There is no need to spray poisons on everything. Quite often, though, people's fears outweigh their ability to reason.
8 years ago. | Permalink

Would you like to put this in our thread for Flowers on black, on the discussion page?
6 years ago. | Permalink

Thank you for sharing your beautiful capture again in our thread for flowers.

A beautiful close-up with great colors and details. The ladybug is lovely!
5 years ago. | Permalink

So bright and beautiful!
9 months ago. | Permalink

Awesome colours of this chrysanthemum, the little ladybug makes it for this photo...
8 months ago. | Permalink

Awesome colours for this chrysanthemum, the little ladybug "makes" it for this photo, great.
8 months ago. | Permalink

Amazing bright colors in this photo.
8 months ago. | Permalink

LOVE THE LADYBIRD
8 months ago. | Permalink

A lovely close-up and great colours.
8 months ago. Translate | Permalink

Good work. Hope you are keeping safe and well ;-)
8 months ago. | Permalink

Beautiful photo, and great to see a species thought to be extinct return.
Have a wonderful weekend and stay well, Nora!
8 months ago. | Permalink