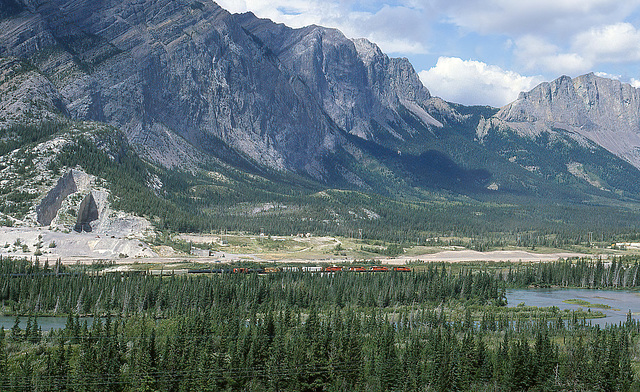 I was attending a Mobil Oil Tectonic Geology course through the mountains and should have been listening to the description of the rock outcrops here but the chance of a photo of a train in this fabulous landscape was too much of a diversion.

Mount Yamnuska, right, & Old Goat Peak, centre, are part of the Rocky Mountain Front Range and the abrupt change between the steeply dipping, folded & thrusted rocks in the west and the flat lying Interior Plains rocks to the east is dramatic. Here Middle Cambrian carbonates have overridden Cretaceous Belly River Formation along the McConnell thrust fault.

(I may not have been listening but I still have the field notes!)

Erhard Bernstein, Nouchetdu38, Annemarie, slgwv and 3 other people have particularly liked this photo

Thanks for that Jaap.
5 months ago. | Permalink