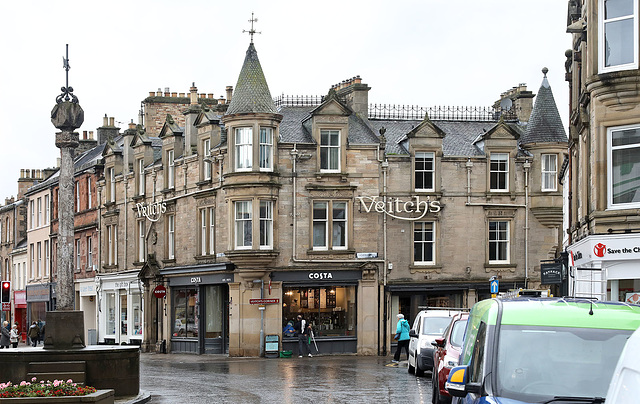 Veitch's outfitting business was started in 1884 by Robert Veitch and his wife, Helen Binnie Peden at their house in Gladstone Place, Peebles, and one year later they moved into newly-built premises at 2 High Street. About 1887 the business extended into the adjoining shops, which had been formerly occupied by J. Laidlaw (butchers) and J. Mason (bootmakers) at 1 and 3 Northgate and twenty-three years later they took over premises at the rear, for a men's department. The upper-floor living-accommodation was also converted for business use at that time. The Veitch's 'logo' was originally drawn on the back of an envelope by a friend of R. B. Veitch whilst they were serving together during the First World War, and remained unchanged therafter.

The business closed in 2008 and lay empty until January 2016 when Costa Coffee opened after several other proposals to re-open one of Peebles most historic buildings had failed to materialise.