Latest posted Navigate on the map Photos with specific people Most appreciated Most viewed Most commented Search by keywords Search by date
See also... tarboat's
favorite photos All the photos where
tarboat appears 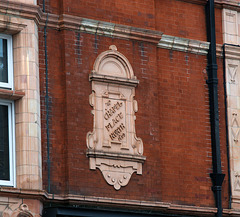 The development of the Grosvenor Estate in Mayfair during the late nineteenth century saw the installation of some very fancy terracotta panels carrying the street name and date of construction. This example from Chapel Place North dating to 1893 is typical. Bottom right of the panel the name of the architect responsible is inscribed in the bricks; Albert John Bolton of Lincolns Inn Fields. The current address of this property is 29-32 South Audley Street. 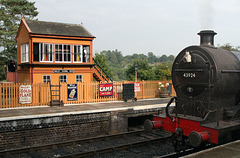 4F 43924 waiting to cross another train at Arley on the Severn Valley Railway.

National Grid gas storage site at Partington in Manchester. This was once the site of a large town gas works to which this was a main entrance. Since my visit the site has been closed and completely cleared but the gates remain.

It is clear what is made at the Echter distillery in Nordhausen. 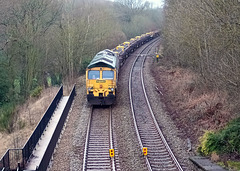 Yesterday I was surprised to look over the bridge at Middlewood and find 66 564 with a permanent way train sitting shut down and silent. I am unsure what users of the footpath crossing in the background are supposed to do. 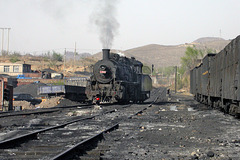 SY 0366 runs around its train at the Sanjiazi terminus of the Nanpiao Coal Railway. The grit and dust sums up perfectly the industrial coal carrying line which was still using some wooden bodied wagons, seen on the extreme right, for internal service at this time. 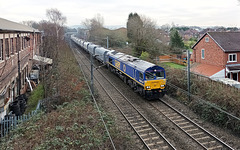 Whilst waiting for a hospital appointment I wandered up to Bramhall Moor Lane Bridge between Hazel Grove and Woodsmoor on the LNWR Buxton branch. For my troubles I was rewarded with 66 797 at the helm of an aggregate train from Peak Forest to Hope Street Peakstone terminal in Salford. 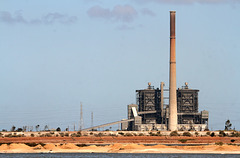 Northern Power Station was located at Port Paterson in the Australian state of South Australia about 6 kilometres south of Port Augusta. It was coal powered with two 260 MW steam turbines that generated a total of 520 MW of electricity. It was operated and maintained by Alinta Energy and was commissioned in 1985. The plant ceased electricity production in May 2016 and was decommissioned and demolished over the following few years. Also closed at that time were the nearby Playford B Power Station, and the Leigh Creek coal mine, 280 km to the north, that supplied them both with fuel. 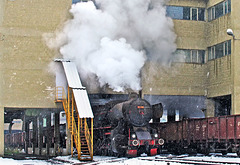 Kriegslok 33-064 shunts under the screens at the Sikulje mine, Lukavac, Bosnia-Herzegovina. This was one of the last places that this class of locomotive saw regular industrial use. 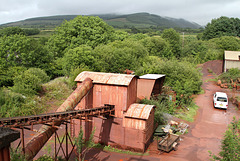 The Florence ironstone mine near Egremont continued in use until 2008. It was the last working deep iron ore mine left in Western Europe and produced ore, products for the cosmetics industry and high quality haematite for jewellery. Production ended when BNFL ended the contrract for the mine to supply water and the cost of pumping rendered the mine uneconomic. The red haematite has had a marked effect on everything it touched, including these buildings on the surface.

The town of Orroroo in South Australia was connected by the Peterborough - Quorn railway line in September 1881, and was served by a Class 1 station and a large Goods Shed. During 1962, concrete grain silos were built in the Yard and these provided the bulk of traffic until the railway was closed in 1987. Orroroo was the last attended station on the railway; staff were withdrawn and the station operated as "unattended" from August 1981. Passenger services were discontinued during 1969, when the South Australian Railways withdrew the railcar service. Grain continued to be hauled by rail from Orroroo until 1987, when all rail services were withdrawn by Australian National. Steamtown, a railway preservation group based at Peterborough, operated passenger trains for tourists to Orroroo and Eurelia until 2002. The track was eventually removed in 2008. The station building is currently (Jan 2022) for sale as a house. 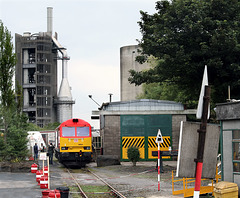 Class 60 024 sits outside the loco shed at the Ribblesdale Cement Works, Clitheroe. 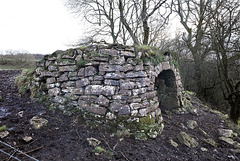 A sunny January day provided an opportunity for a mini limekiln frenzy around Denbighshire. Before the light beat me I managed to visit fourteen different kilns. This was the last one of the day and is in good condition. 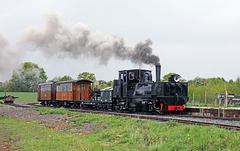 The original Beyer Garratt, K1, which was supplied to the Tasmanian Government Railways in 1909 for use on the North East Dundas Tramway. After overhaul at the Statfold Barn Railway it is seen here out on the line passing the halt on the balloon loop in the fields during a 30742 Charters event. 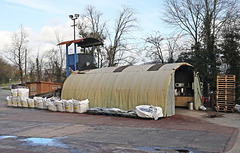 A spacious brew hut in a surfacing materials yard.

A panorama of the Sellafield nuclear fuel reprocessing plant in Cumbria. The site currently directly employs about 10,000 people, and is owned by the Nuclear Decommissioning Authority (NDA) which is a non-departmental public body of the UK government. Following a period 2008-2016 of management by a private consortium, the site has been returned to direct government control by making the Site Management Company, Sellafield Ltd, a subsidiary of the NDA. The site is due to be fully decommissioned by 2120 at a cost of £121bn. 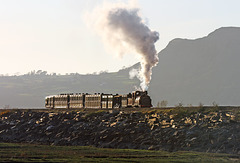 Prince brings a late afternoon train of vintage stock across the Cob at Porthmadog on the Ffestiniog Railway. 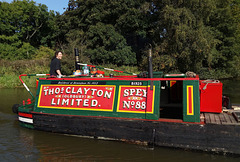 Ex Thomas Clayton tanker Spey takes the turn under the old railway bridge between locks 11 and 12 at Bosley on the Macclesfield Canal. The boat was built in 1937 at Uxbridge and spent its career moving gas oil from Ellesmere Port to Oldbury and also gasworks byeproducts around the West Midlands. It has been in preservation since the 1960s.
6935 items in total
Jump to top