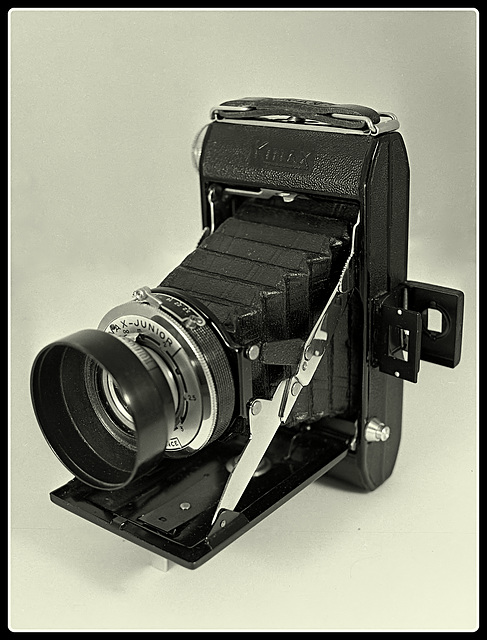 It is strange that France, which played such an important role in the development of photography, should have produced so few notable makes of cameras - but on reflection, I suppose one could say exactly the same of the British!

Almost all French made medium format folding cameras were 6x9, there were a few 6x4.5, but I can think of no 6x6 French folders, although I'm sure there must have been some! This is a 6x9, a Kinax Junior, made by Société Industrielle de Photographie et d'Optique, Paris & Montreuil sous Bois, I think, in 1953.

Well made and well finished, this version shared the same body as the more highly specified models, but has only a modest f6.3/100mm triplet lens in a simple 4 speed shutter, 1/10th to 1/150th + B. It uses 620 film, which is why I have only ever taken a few rolls of film with it, and the lens has a strange 29mm diameter mount for push on filters and hood, so I had to machine up a little adapter ring to allow the more normal 32mm fittings to be used.

The camera is like new, seems to have been hardly ever used, and now I have sorted converting 120 to 620 without re-spooling, I will put another roll through it, but the f6,3 is a bit limiting, as is the top speed of 1/150th, so I'm not optimistic - really, just a Shelf Queen!

Eric Desjours, , , Chronocrator and 8 other people have particularly liked this photo

Robert, many thanks for your kind words!

They are really unbeatable as a studio camera, but using them in the field is more a test of endurance than pleasure at my age, although I did use them a lot, in often very poor conditions, when I worked on research ships, but I was younger and fitter then !!
4 years ago. Edited 4 years ago. | Permalink

June, thanks for your visit!
4 years ago. | Permalink

Beautiful camera and a beautiful image of it ! My favorite 6X7 is the RB .... I have every lens except the 500mm. and the 65mm. Yes, it is cumbersome in the field but a workhorse with many advantages from the bellows to the leaf shutter and superior lenses.
4 years ago. | Permalink
Mikeinlagardette
has replied to Tom Angelo

Tom, many thanks for your encouragement!

I agree completely, - the RB/RZ's are just about the most versatile roll film camera ever made! I have only the 90 and the 65 lenses, but they serve well enough for most things, although they don't get out that much these days !!

My RB is perfect for the table top still life's I shoot but out in the field the Bronica GS1 is smaller and lighter but still does not compare to the RB.
The 127, 90 and 65 are probably the one's I use most of the time ... the rest of my lens collection is just overkill ! haha!
4 years ago. | Permalink

"I have sorted converting 120 to 620 without re-spooling," You intrigue me even more with that statement besides the discourse on the unusual camera. Is there somewhere I can go to find out more? I have a couple of 620 that might like a look at the scenery again!.
4 years ago. | Permalink
Mikeinlagardette
has replied to Murray Kelly

Murray, please excuse the delay in replying, - the intolerable pressures of retirement !!

Now, as for the 120/620 thing. I have a nice workshop, with a toolroom lathe, and I decided to try machining the 120 spools straight out of the box, with the film still in place. The outside diameters are easy, the film is mounted between centres and the flanges turned to size,the only thing to take care of is that the film wrapper end must be "trailing", to avoid the risk of snagging on the tool.

Often this is all that is needed, a lot of 620 cameras will accept the wider 120 spools, but if machining the end flanges to the correct overall width is also called for, a simple split collet, machined from tube, is slipped over the paper wrapper so that the film can be gripped safely in the 3 jaw chuck. This avoids; (a) the inevitable pressure marks from the chuck jaws appearing on the processed film, and (b) much more importantly, the dangers of trying to machine any component that is not securely held - rolled paper/film is not a stable medium !!

Even so, it's best to take light cuts, and not go at it like a bull at a gate, - the flanges are quite thin when machined to size, and of course they are plastic, not metal like the original 620's, and they will distort if heavy cuts are taken.

Some cameras will work quite well with the pivot holes provided by 120 spools, but I usually put a little aluminium bush in each end, so that the film rotates correctly on the original 620 pivot pins. All this takes more time to describe than it does to do it, I reckon about 4 minutes to re-size, and I turn up the bushes in a batch of ,say 30, at a time, so it's not a big deal.

I'm surprised some enterprising outfit hasn't started doing this commercially, it could be easily automated, but I suppose the demand would be quite small, even worldwide. I did consider offering a service doing this a few years ago, but sadly the postal costs would be prohibitive, and anyway, I enjoy being retired !!

We all know that different makes of films are different photographically, and so it is with physical dimensions, and I found that the wrapped film diameter varied with different manufacturers, so I made three different collets, 0.900", 0.875", & 0.850" inside diameters, which covers any film I'm likely to use. The OD of these is not important, I used some PVC tube I had, - the length should be around 2.350" (60mm).

There it is, Murray, - don't try this at home, unless you know what you are doing !! Meanwhile have a very Happy Christmas, and best wishes for the New Year!

Thanks, Mike. I did find a place that filed and sandpapered the flanges and was stressing the importance of removing all traces of dust and debris. I did, however, get the picture, and reckon I could do it easier - sans lathe. Then I went looking for cheap film. That's even harder than the flaming conversion!
As a boy I had an el cheapo camera that took either size. Unfortunately the pictures were awful - nothing was in focus anywhere. Great engineering but hopeless optics.
As I said, I have no lathe so that's out. I do have 2 Shanghai in the fridge so it could happen yet!
Murray
4 years ago. | Permalink