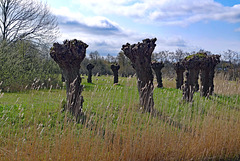 The Oudorperhout is the oldest polder in the Netherlands. The area of 42 hectares is bordered by the centuries-old cobbled road "Munnikenweg" and the “Hoornse Vaart” with its windmills . After the village of Oudorp was merged with the city of Alkmaar, part of the polder remained open and developed into a unique meadow landscape with many birds, ponds, ditches, reed beds and unique plants. In the Oudorperhout the remains of two castles built in 1290 are visible: “Nieuwburg” and “Middelburg”. 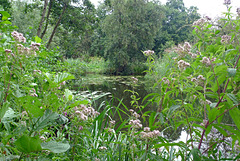 The Groene Hart (Green Heart) of the Netherlands is a relatively thinly populated area, covering much of the middle portion of the Randstad megalopolis. The major Dutch cities of Rotterdam, The Hague, Leiden, Haarlem, Amsterdam and Utrecht surround this area. On a bicycle trip near the Ankeveense Plassen (Ankeveen Lakes) - an area largely formed by the excavation of peat in the 16th to 18th centuries - we were pleasantly surprised by a truly GREEN jungle. 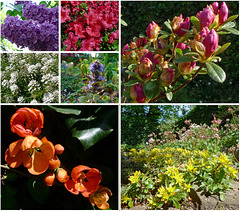 Pictures of flowers taken during a ‘corona-stroll’ in my garden. 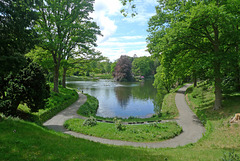 At the end of the 19th century large pieces of the estate Berg en Bosch were bought by the Belgian merchant J.C. Wils (there is still a J.C Wilslaan in Apeldoorn). He had conifers planted, which were used for mining. After his death, the municipality of Apeldoorn bought the site. Part of it was used for the construction of a residential area; the other part remained available as a walking forest for city residents and tourists. In the twenties of the 20th century the first initiatives for Park Berg & Bos were made. During the crisis years (1934) the large pond was dug by hand by unemployed workers from the municipality as a procuring of employment project. The 250-hectare park adjacent to “Het Loo Royal Estate” offers a mixture of plants, trees and animals from the Veluwe. Plant borders close to the entrance define the image and paths around the pond invite for a walk. The further you get, the more the Park Berg & Bos, will resemble the surrounding nature of the Veluwe with its extensive forests and small heathlands. Since 1971 part of the park has been used by the famous Apenheul , a zoo with free roaming primates. Except Apenheul the park can be visited for free.

The Paleispark (Palace park) is a part of Kroondomein Het Loo (Het Loo Royal Estate). With an area of 650 hectare the park is ideal for strolling and walking. It lies adjacent to Paleis Het Loo and around Kasteel Het Loo . Traditionally this park (PiP 5 and 6) was for the relaxation of the royal residents of and their guests. The origins of the palace park can be traced back to stadtholder Willem III, who purchased hunting lodge Het Oude Loo in 1684 together with 200 hectare land. Het Loo Royal Estate was also very important for Queen Wilhelmina. She purchased many acres of land and donated this to the State in 1959, retaining the rights of usage for the reigning monarch. This explains the name for the whole area: Kroondomein Het Loo (Het Loo Royal Estate). The palace park is only a small part of Het Loo Royal Estate. The park features ponds (PiP1), a tea pavilion (main image and PiP2), which was often used by Queen Wilhelmina, a bath-house, a royal horse cemetery (PiP3), an old shooting range, a hunting lodge (PiP4) and several follies. The park is open - against a small fee - the whole year round, the fenced part around Het Oude Loo is open for visitors only during the months April and May. 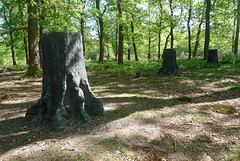 The Kathedraal (Cathedral) is a work of art by Marinus Boezem. It was donated to the Kroondomein Het Loo (Het Loo Royal Estate) by the then Queen Beatrix on the occasion of her 60th birthday to underline the connection of the House of Orange with this nature reserve. The artwork was unveiled in 1999. The work of art consists of 40 bronze tree trunks on a concrete foundation. They have been placed exactly according to the floor plan of Reims Cathedral, on a surface area of 125 by 35 meters. The stumps are casts of a by the artist modeled clay model. The Kathedraal is one of the most hidden and inaccessible works of art in the Netherlands. Located in the middle of the woods - not signposted - of the Kroondomein Het Loo it can only be reached on foot or by bicycle. 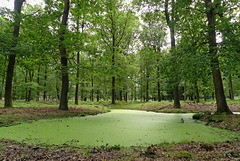 Puddle of rain water, completely covered by green common duckweed (??). Took this picture along the Wieselseweg in the ‘Kroondomein Het Loo’ (Royal Domain Het Loo) nearby the so called ‘Kathedraaal’; an artwork of 40 bronze tree-stumps.

Landgoed Woudhuizen - commonly called Woudhuis - has a natural-historical as well as an important cultural-historical past. Already in the 14th century there is evidence of habitation. In view of the flooded environment in many places, it must have looked largely wet and swampy. The estate is officially mentioned for the first time in the year 1582, when it came into the hands of the St. Catharina Gasthuis in Arnhem . In 1860, the - in Apeldoorn - well known family Tutein Nolthenius bought the western part of the estate and built the mansion Het Woldhuis (PiP1). In 1964 the municipality of Apeldoorn bought the eastern part. Eleven years later this was followed by the purchase of the other part, making the estate ‘complete’ again. Landgoed Woudhuizen is characterised by an alternation of woods, meadows (main image and PiP2), wooded banks (PiP3) and fens. The estate - approximately 225 ha - is intersected by old tree-lined avenues (PiP4) and still has some little old farmhouses (PiP5). Since March 2020, the estate has been managed by Natuurmonumenten, a Dutch society for preservation of nature monuments in the Netherlands. 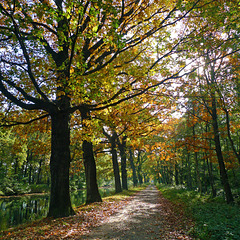 Apeldoorn - Dierens Kanaal is the second part of the Apeldoorns Kanaal, a waterway from Hattem in the north to Dieren in the south. After arriving of King Willem I digging of the northern part started in 1825. Plans for the southern part between Apeldoorn and Dieren (river IJssel) came into execution and digging began. Ten years later the canal was officially opened. In 1972 the canal was closed for shipping traffic; nowadays you only may see a canoe, rowing boat or pedal boat in the canal. More information about the Apeldoorns Kanaal (Dutch)l: www.apeldoornskanaal.com 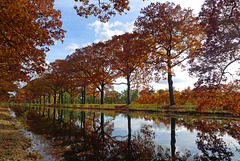 Autumn along the 'Apeldoorn - Dierens Kanaal' nearby Oosterhuizen. This is the second part of the 'Apeldoorns Kanaal', a waterway from Hattem in the north to Dieren in the south. After arriving of King Willem I digging of the northern part started in 1825. Plans for the southern part between Apeldoorn and Dieren came into execution and digging began. Ten years later the canal was officially opened. In 1972 the canal was closed for shipping traffic; nowadays you only may see a canoe, rowing boat or pedal boat in the canal. More information about the Apeldoorns Kanaal (Dutch)l: www.apeldoornskanaal.com

Wenum is more of a hamlet, coming into being on a east-west ridge of sand. The landscape around Wenum is characterized by streams, fields and meadows close to each other. This small scale landscape changes gradually eastwards into an open agricultural landscape. Characteristic is the Wenumse Enk ('upland field’), a large spherical open field on the sand ridge. Landmark of this Enk is the windmill ‘Oranjemolen’, also called ‘t Haasje’ (PiP). 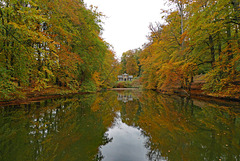 Park Zypendaal (also called "Zijpendaal") is a city park on the north side of Arnhem. The park is situated on a lateral moraine that was pushed up by glaciers in the penultimate ice age (about 150 million years ago) at the southern edge of the Veluwe. As a result, there are quite large height differences for the Netherlands. The park is named after the water that “sijpelt” (seeps) from the ground in some places. The Sint Jansbeek has its source in the park and flows via ponds and waterfalls 35 metres lower into the river Rhine. Park Zypendaal is designed by landscape architect Eduard Petzold and dates from 1864. The park is sloping and wooded with pine and deciduous trees and meadows in the north. Huis Zypendaal - a beautiful 18th century country estate - is situated in the park. 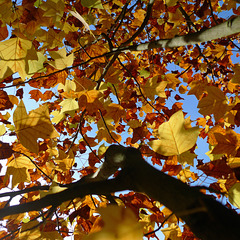 First signs of autumn in Park Sonsbeek. Park Sonsbeek is one of the most beautiful city parks in the Netherlands. It is one of the three parks penetrating the heart of the town from the north. It has a splendid variety in landscape. Forest and fields are combined with some of the most picturesque monumental places within Arnhem. Most probably the park is named after Anna van Sonsbeeck, who was owner - early 17th century - of one of the watermills along the Sint Jansbeek (flowing through the park) and Huis Sonsbeek. Others say that its name came from the Sint Jansbeek, in the middle ages named Sonte Johannesbeek and later bastardized to Sint Jansbeek. 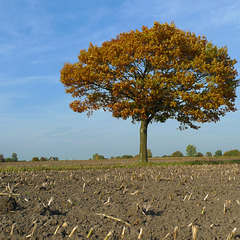 The ‘Beekberger Enk’ is located between the villages Beekbergen, Lieren and Oosterhuizen more or less against a moraine, which came into being during the last ice age about 150,000 years ago. In the 19th century parts of the ‘enk’ still were heath land and shifting sand dunes. Farmers held sheep on these waste grounds. Sheepfolds were often found in the villages and every day the sheep were driven out to the heath and returned every night to their barn. The manure of the sheep in the barn, mixed with heather sods, was used to fertilize the landscaped acres. On this way came contiguous agricultural lands into being between the three villages. They were called ‘enk’. Some fields have been raised a meter or more during the last centuries. They still have a typical profile: high in the center and lower at the borders. The fields on the ‘Beekberger Enk’ are still used as arable land and one can still see the ‘hilly’ profile. 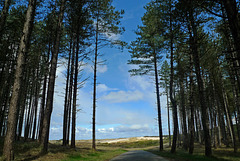 White topped dunes in the ‘Noordhollands Duinreservaat’ (North-Holland Dune Reserve). This reserve is controlled by the provincial water company and stretches from Bergen aan Zee till the North Sea Canal, nearby Wijk aan Zee. The area is open to the public (walker and cyclist), however an admission ticket is needed. The photo is taken along the Verspijckweg (a bike lane through the dunes) just north of the village of Bergen aan Zee. PiP the same area with blooming heather in August. 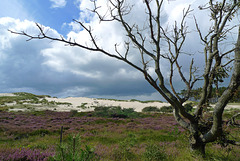 White sand of the dunes and blooming heather in the ‘Noordhollands Duinreservaat’ (North-Holland Dune Reserve). This reserve is controlled by the provincial water company and stretches from Bergen aan Zee till the North Sea Canal nearby Wijk aan Zee. The area is open to the public (walker and cyclist), however an admission ticket is needed. The photo is taken along the Verspijckweg (a bike lane through the dunes) just north of the village of Bergen aan Zee. 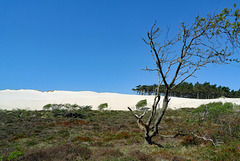 The ‘Noordhollands Duinreservaat’ (North Holland Dune Reserve) is with its 5.300 hectare one of the largest natural areas in the Netherland. This reserve is managed by PWN (Water Supply Company North Holland) is used for drinking water production at three locations. The ‘Duinreservaat’ stretches from Bergen aan Zee till Wijk aan Zee. It offers dunes, some of them with white sand (main picture and PiP1), large pine and oak forests (PiP2) and in the summer blooming heather (PiP3). The area is open to the public (walker and cyclist), however an admission ticket is needed. 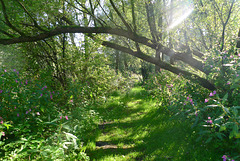 Dutch wetland ‘jungle’ in the Biesbosch* National Park. Picture was taken along the so called ‘Griendmuseumpad’. During my visit completely lined with blooming Himalayan Balsam (PiP). The ‘Biesbosch National Park’ is a green maze of rivers, islands and a vast network of narrow and wide creeks. The park is one of largest and most valuable natural areas in the Netherlands. It’s also one of the few remaining fresh-water tidal areas in Europe. (*Biesbosch = 'forest of sedges' or 'rushwoods')
90 items in total
Jump to top