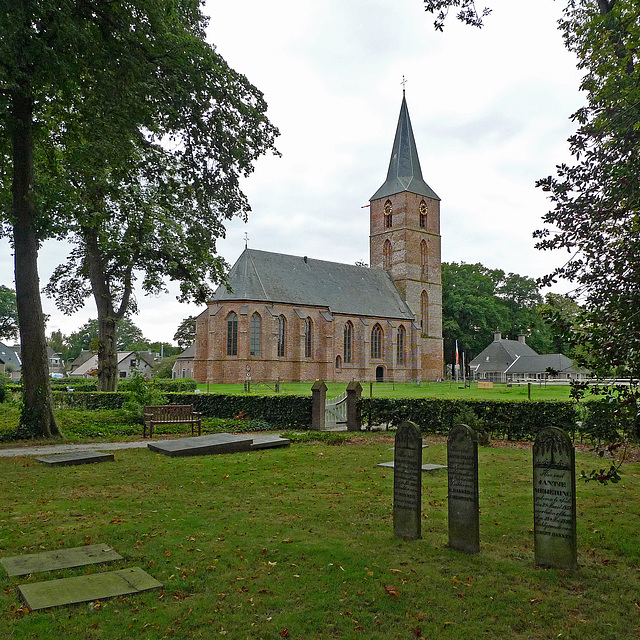 Rolde, once the capital of the area known as the Rolderdingspel, had already a wooden church around the year of 900. Around 1200 the first stone church was built: a large Romanesque church with three naves.

Most probably the construction of the present Jacobuskerk (James Church) began in the early 15th century and was inaugurated late 1427 or early 1428 and put into use as a roman catholic church. It became a protestant church after the reformation of 1598 (nowadays both protestants and catholics are using the church for their services).

The Jacobuskerk has a remarkable high tower (52 meters), which is visible from far away and served in the past as a beacon for travelers to and from the city of Groningen. During the most recent restoration (1961 – ’64), the church was thoroughly reconstructed to its original form and changes from previous renovations were undone.

The Jacobuskerk is beautifully located in the centre of Rolde, next to an old cemetery and two interesting dolmens. The church is open for visitors daily during summer season. In Septmeber 2021 we were able to have a look inside. The colourful stained-glass windows in the choir were donated after the last restoration by, among others, the province of Drenthe and were made by the glazier Joep Nicolas. The banister organ is dating back around 1820 and was placed in Rolde in 1847. Early 2013, the last major restoration was completed and the organ has largely regained its original character.

Beautiful! I like particularly the PIP with the windows
8 weeks ago. | Permalink

Fine framed capture and a beautiful church too.
8 weeks ago. | Permalink

A beautiful church with impressive spire Jaap.
Love the interiors shots in PiP.

Splendid image of the church with a magnificent perspective and surrounding environment!
The interior details - stained glass and organ- are stunning and also very well shown!
Interesting information too, Jaap
8 weeks ago. | Permalink

Very nice series, Jaap. The inside is really pretty!
8 weeks ago. Translate | Permalink

Another of these interesting brick churches that I never see in my region. The organ is a splendor.
8 weeks ago. | Permalink

Thanks for your visit and kind comments, Jaap.
8 weeks ago. | Permalink

A fine capture bolstered with this description too. Well done again for your Dutch scenes.

Ohhhhhhhhhhhhhhh!!! *falls over* What a church! It has such a wonderful shape and the inside.... THE STAINED GLASS!!! I'm dying!! LOOK AT THEM ALL! I would so love to go and take an individual image of each one for a lovely presentation to showcase them all. MARVELOUS! And still your show goes on...the magnificent pipe organ details (is that the right terminology?) are breathtaking. Truly, pictures alone, your presentation is captivating! (and yes, I saw the grave markers too...your composition is outstanding!)

Reading about this place is very interesting too. I'm glad they renovated the church to its original appearance. Also, fascinating to learn this is also the home to the dolmen you featured previously. Wow...what interesting things to see and learn about in that area!
8 weeks ago. | Permalink

Nice picture, and the organ and stained glass windows are splendid!
8 weeks ago. | Permalink

Elegant pipes in the PiP Jaap!
8 weeks ago. | Permalink

We have something in common with our languages. Kerk is kirkko in Finnish ;-)
A nice pic.
8 weeks ago. | Permalink

Wonderful church from a good point of view. All the best, Anton.
8 weeks ago. | Permalink

An ancient church with its cemetery joined in the same photo .... splendid!
All the best
Fabio
7 weeks ago. | Permalink

This ecumenical church is quite remarkable, captured in a so charming setting.
A surprisingly bright interior, culminating in this delightful organ.
I wish you a nice and safe weekend, Jaap.
7 weeks ago. | Permalink