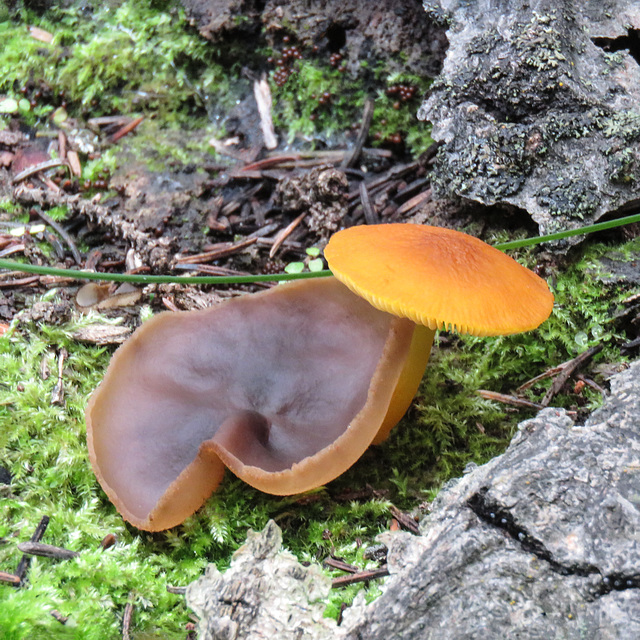 SNOW, SNOW, GO AWAY. DON'T COME BACK ANOTHER DAY! Sigh, it snowed again overnight and this morning. There are about 10" of the white stuff along the top of my fence. After today, the forecast says we are in for some sunny, cold days. Sure hope the snow melts as fast as possible.

Today, I have added 8 more photos from 8 September 2019, taken at Rod Handfield's acreage.

On that day, we had such a wonderful four and a half hours, searching for different kinds of fungi in the amazing forest on Rod Handfield's land, SW of Calgary. I think this was our tenth visit - the first one I went on, being on 25 June 2009 - each one resulting in various different species. It was so overwhelming yesterday! You didn't know which direction to face and which mushroom to photograph first. They were everywhere! Such a contrast to our visit on 6 August 2017, when basically there were no mushrooms (other than maybe three), because everywhere had been so very dry.

As always, thank you so much, Rod, for so generously allowing us to explore your property. This has been my favourite place to visit for quite a number of years now. We greatly appreciate your kindness - you are always so welcoming, and we learn so much and discover so many beautiful things. Thank you, Karel, for leading the group and helping with identifications. I'm sure at least some of us are anxiously waiting for you to have time, in between leading botany walks, to post some of your photos along with their IDs. Meanwhile, "fungus" has to be sufficient for many. As usual, any IDs given are always tentative, not 100% confirmed. Rule is, if you are not an expert in mycology, do not pick wild mushrooms to eat!
Suggested groups:
Comments