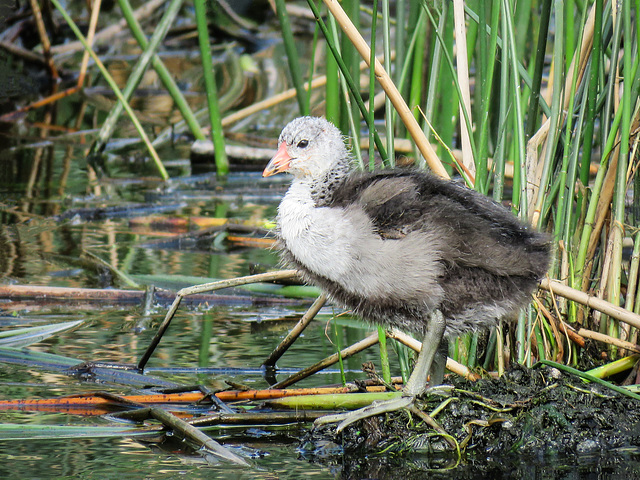 Our weather forecast for today, 6 July 2019, from the Weather Network:

"A multi-day severe storm threat looms for the Prairies. This weekend is ripe with storm risk, with Saturday's thunderstorms set to fire for the afternoon and evening, along with some tornado chance on the table for southern Alberta -- something visitors to the Calgary Stampede should keep an eye on."

This morning, 6 July 2019, I am posting 7 more photos taken three days ago, on a drive south to Frank Lake. Yet again, when I checked the weather forecast, it said continuing rain for day after day after day. However, the sun was shining when I decided to drive south. The clouds were sufficiently photogenic for me to change my plans and, instead of calling in at the Saskatoon Farm, I drove straight to the Lake.

The previous time I was at Frank Lake, there was one Coot, two Canada Geese, and a Red-winged and a Yellow-headed Blackbird. Two days ago, it was so much better! The Barn Swallows were there, having built their nest a few feet away from their previous nest site. The Eared Grebes had their tiny, adorable babies, sometimes riding on their back, other times swimming separately. Same thing with the Coots - some had very young babies; others had somewhat older youngsters. One Coot adult and baby were walking in thick mud, searching for food. They both looked such a mess, as if they had rolled in the mud. A pair of Western Grebes could be seen far in the distance.

The sky began to change - the white clouds were taken over by rather menacing black ones and it became windy and the rain started. I really didn't want to drive back home on the very busy highway in pouring rain, but after waiting and hoping for it to end, I eventually had no choice but to risk it. As it turned out, there was hardly any traffic going north.

It has been raining on and off for something like three weeks now, and everyone is tired of the rain. The famous 9-day Calgary Stampede runs from 5-14 July this year and rain during Stampede makes things so unpleasant! Judging by my Stampede photos posted on Flickr, I haven't been since 2013, when I went with my daughter - surely it hasn't been that long? I know I haven't been the last few years, as it was feeling just too much to deal with. Happy to be away from the huge masses of people and the sickening smell of grease, ha, ha! Of course, not going means not getting any mini-donuts, too. Happy Stampeding, everyone! May the sun shine ....
Suggested groups:
Comments