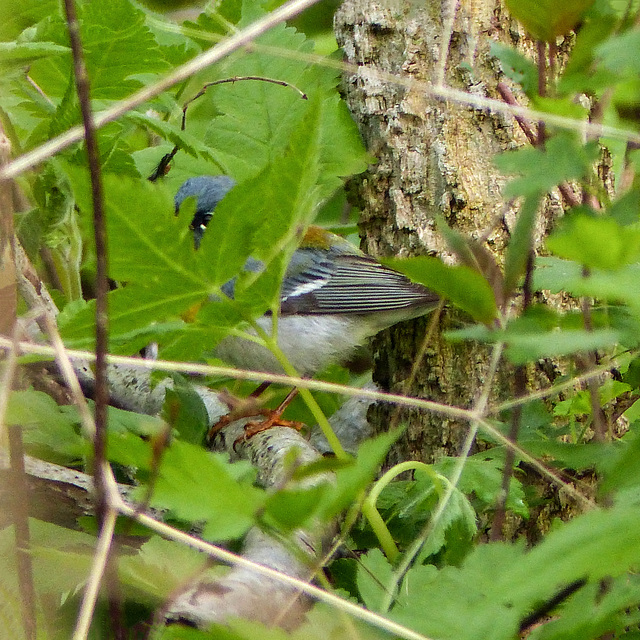 This evenning, I came across this photo and was going to delete it, but then decided to look more closely. Turns out it is a Northern Parula - a bird that I thought I had missed when we were at Pt Pelee. A friend. who is an excellent birder, confirmed the ID for me this evening, and I am thrilled that I did see this bird species after all!

Finally, I am getting back to sorting through and editing my photos from a trip with friends to Pt Pelee in Ontario, and Tadoussac in Quebec. Will have to work on this in between an absolutely mammoth clearing-out of my home, partly because of the mouse/mice that have totally stressed out and drained me for the last seven or so months. Though I started off using mouse traps, nothing was caught, which is when I had to pay for a pest control guy to come - useless. Friends and I placed several simple, disposable traps recently and, hey presto, one mouse was caught (to my horror, ha). Since then, after my friends very kindly came and removed it, I have seen no sign or sound from any further mice, so I'm keeping my fingers crossed. These four photos were taken on Day 3 at Pt Pelee. Photos taken in the morning were during a tour with Tom Hince, from 6:00 am to 11:00 am - so many birders on the trails! Funny how so many birders are very tall people, so I often could not even see anything. I have added one friend's ebird list for birds seen on Day 3 at Pt Pelee, in a comment box below. Most of these birds were not seen by me : ( However, I was happy to see what I did see.

I try to post in more or less the order in which my images were taken. I have a lot of images that I want to add to my albums for this holiday, many of poor quality or of little interest to others. I wil try and post a lot at night, when most people are probably off Flickr. Please bear with me.

Four friends (four of the six friends with whom I went to Trinidad & Tobago in March 2017) and I left Calgary airport on 6 May 2018 and flew to Toronto, Ontario, Canada. There, we rented a van and did the long drive to Point Pelee for four whole days of birding. We stayed at the Best Western Hotel in Leamington, which is close to Point Pelee National Park. It fills up very quickly (with birders) and our rooms were booked months ahead of time.

Our four days walking at Point Pelee and area were very interesting and I, for sure, saw various things I had never seen before, including my very first Raccoon : ) Various friends had told me that the Warblers at Pelee were fantastic - so many and numerous species, and so close. Have to disagree with the "closeness" when we were there! I don't have binoculars as cameras are enough for me to carry around, so I know I missed all sorts of birds. Though my Warbler count was lower than my friends' counts, I was happy to at least get a few distant photos of some species. So many of my shots are awful, but I will still post some of them, just for the record of seeing them. Some photos are so bad that I doubt anyone can ID them.

We covered several different trails at Pelee, and also drove to a few places somewhat further afield, such as Hillman Marsh. I couldn't believe my eyes when I saw the magnificent barn at this Conservation Area! I was in so much pain that I wasn't sure if I would be able to walk across a grassy area to take a few photos. However, it was so unusual and beautiful, that I reckoned I could try and move forward inch by inch - or crawl (ha, ha) if necessary. Another place we enjoyed was Rondeau National Park. One amazing and totally unexpected sighting just outside Pelee was a very distant male Snowy Owl sitting in a fieldl!!

We walked every single day that we were at Pelee and the areas mentioned above, seeing not just birds, but a frog/toad, snakes that we suspect were mating, several Painted turtles, a few plants (including both white and red Triliums, that I had never seen growing wild before, and a couple of Jack in the Pulpit plants).

The Friends of Point Pelee have food available at lunch time that one can buy. They also have a shuttle bus that one can take from the Visitor Centre all the way to the southern tip of Pelee, which is the most southern part of Canada. They have birding walks with a guide each day (there is a charge), but we walked the trails on our own, except for one morning. On 9 May, we spent the morning from 6:00 am to 11:00 am on a birding walk at Pelee with guide, Tom Hince, whom we had contacted while we were still in Calgary.

At the end of our stay at Point Pelee, we had to drive all the way back to Toronto, from where we flew to Quebec airport. From there, we had a four-hour drive to Tadoussac on the coast of the St. Lawrence Seaway. This is such a delightful, small place and in a beautiful setting. One of our friends, Anne B, and her husband have a summer cabin further along the cliff from the few stores and port. She had invited the four of us to go with her from Pelee to spend a week at her beautiful home. What an absolute treat this was! We were able to meet some of her relatives, too, who also have built cabins out there. We were looked after so well, and we were able to see and photograph all sorts of birds and other things. We made several trips to see different places, including the Cap Tourmente National Wildlife Area, where we were able to see endless thousands of Snow Geese. Breathtaking!

We also had two boat trips from Tadoussac - one was a whaling trip in a Zodiac, where we saw very, very distant Beluga and Minke Whales. The Belugas looked almost like the white wave crests - but they were Belugas. The other boat trip was to the Brandy Pot Islands, inhabited by thousands of Razorbills and Common Murres, which were new birds for us, and Double-crested Cormorants that were nesting in tree tops. That long boat trip (in a tiny boat named Juno) started off in the rain and dark clouds and it was soooo cold! Thermal underwear, layers of fleece and toque and gloves were needed. This day was arranged through a contact of Anne's and it was so much enjoyed! Of course, we anchored a distance away from the island and sat there and ate our sandwiches and took endless photos. It is forbidden to land on the island at nesting time.

Anne B, I can't thank you enough for organizing this holiday for us all and for inviting us to spend a week at your cabin. You worked so hard and it was so much appreciated by each and every one of us. Thank you for doing all the many hours of driving, too! Janet and Anne, thank you so much for compiling the lists of birds seen each day at various locations, and posted to ebird. These entries will be a huge help while I try and sort out where we were and when, and what species we saw. Miss your cookies and muffins, Janet, that you kindly made for us in Tadoussac, to go along with the wonderful meals that Anne planned and made for us : )
Suggested groups:
Comments