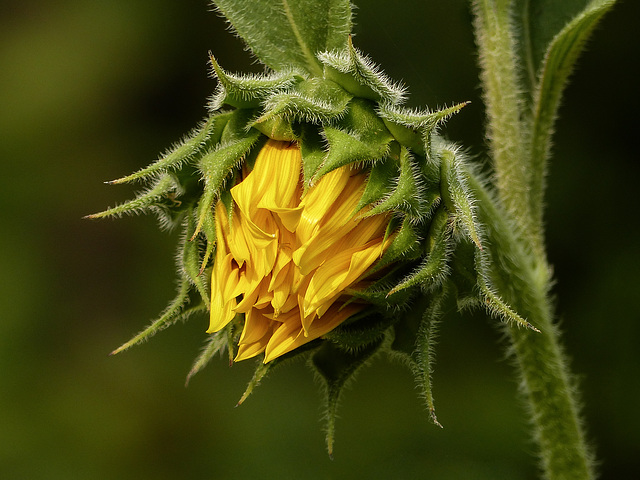 This is the only photo I am posting this morning, so that I am not in such a rush. This sunflower was growing, with many others, in the garden at Marsland Basin. Yesterday, I spent the day feeling dizzy, and today I have a long day of driving, so I am really hoping I feel OK.

Today is already 5 September 2017! Here, more and more trees are turning yellow, everywhere is bone dry, and we have been getting more high temperatures, with more hot days in the forecast. The crazy imbalance of weather just gets worse and worse, with no rain and continuing wildfires in the west, and too much water brought by hurricane/tropical storm Harvey, causing devastating flooding and damage in eastern U.S.. If only the two sides could share the water - how ironic it all is.

Five days ago, on 31 August 2017, I went with 16 birder friends on a day's outing east of Calgary. What a full, rewarding day we had, with 83 species seen! I have added our leader's final list in a comment box below, mainly for my own interest/record. Thanks, Andrew! There were many species that I did not see, as they were too far away, but I was delighted to see three or four species that I hadn't seen or photographed before, including a Black-bellied Plover and Baird's Sandpipers.

It was yet another smoky day (which we've been getting all summer, from the wildfires in British Columbia and, to a much lesser extent, Alberta), but the temperature was more bearable (got up to around 25C) than most of our summer. Early morning was quite chilly, in fact. I read that the dreadful Fort McMurray wildfire in Alberta, that started well over a year ago on 1 May 2016, is finally completely out.

After meeting in the city, we car-pooled in five cars east to Langdon. Our first stop was at Weed Lake; first the south end and then the east side. All the birds were far away, so any photos I took were group shots or a single, very distant lone bird. This kind of birding is very different from when I go out anywhere on my own. It involves a lot of very careful study of each area we stop at, with binoculars and scopes, and it provides very important information on all the bird species. When I go out by myself, I am looking for any kind of bird that is close enough to photograph - usually, the closer the better, of course. I never count bird numbers and I don't make lists. I simply look for anything beautiful - and that often includes old barns, scenery, wildflowers, insects, and so on.

From Weed Lake, we continued east, eventually reaching Eagle Lake and Marsland Basin. I always love going to the latter location; a great place that is called 'home' for our friends, Lynn and Sue. They have a wonderful wetland on their property. After looking at the distant birds, I wandered around the grounds, finding a beautiful, tiny butterfly (Checkered Skipper sp.?), Sunflowers in the garden with a pair of American Goldfinches feeding on the Sunflower seeds, and the two donkeys.

Needless to say, by the time we reached the Eagle Lake area, I wasn't sure where we were, each time we stopped. A few days later, I'm hoping I can remember where I saw at least some of the birds in my photos.

A thoroughly enjoyable trip - thanks, Andrew, as always! Many thanks, too, Lenora and Dick, for letting Dorothy and me carpool with you. It was so much appreciated.

OregonHiker has particularly liked this photo