Sheep River Falls, Alberta Jackie's Hummingbird Talk about baby fluff! Licking salt off the road Showy Aster Barn Owl Spiked hairdo Eastern Kingbird in the middle of nowhere A muddy find with bokeh Little country school with company A road less travelled An unusual shape Short-eared Owl Clouds over the mountains The beauty of our mountains Small and fast .... and adorable Keeping watch over the herd Wide angle on the Bighorn Sheep ridge Waiting for the herd to descend Painted Lady A favourite road Old country schoolhouse Red Birds in a Tree plant Geranium sp. Flight training with a Red-tailed Hawk Splash of colour Cooling down Mule Deer doe Vanishing landscape Curious A pot full of colour Time for a nap Domestic Duck Borage Dragonfly Love those hills Painted Lady Yesterday's main find : ( I fell in love .... Ohio Buckeye or ? Who can resist a Burrowing Owl? Bison with smoke haze Out in the middle of nowhere Anyone have a comb? A wild Sunflower from a gravel road 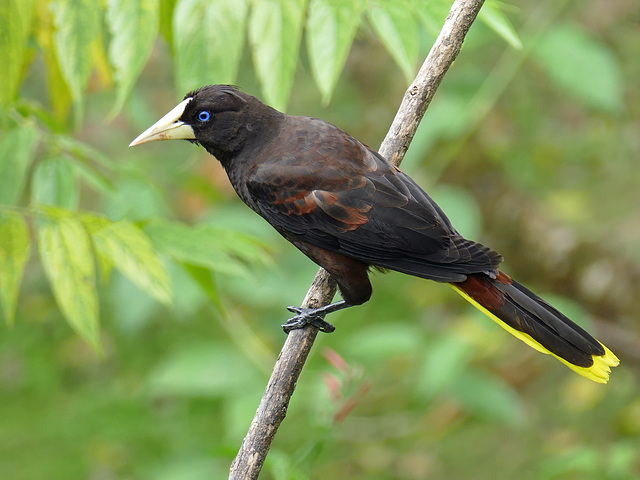 I still have a day and a half's photos to add to my Trinidad & Tobago albums. Hopefully, I will get them finished this winter. Meanwhile, I thought I would add this photo, which was taken on 20 March 2017, while friends and I were staying for five days at the Asa Wright Nature Centre, on the island of Trinidad. These birds were always around. Spectacular birds when in flight, as the underneath of the tail is brilliant yellow. I love their blue eyes. I will add a previously posted photo of hanging Oropendola nests in a comment box below.

"The crested oropendola also known as the Suriname crested oropendola or the cornbird (Psarocolius decumanus) is a New World tropical icterid bird. It is a resident breeder in lowland South America east of the Andes, from Panama and Colombia south to northern Argentina, as well as on Trinidad and Tobago.

The plumage of the crested oropendola has a musty smell due to the oil from the preen gland. Adult males are mainly black with a chestnut rump and a tail which is bright yellow apart from two dark central feathers. There is a long narrow crest which is often difficult to see. The iris is blue and the long bill is whitish. Females are similar but smaller, duller, and crestless.

The crested oropendola inhabits forest edges and clearings. It is a colonial breeder which builds a hanging woven nest, more than 125 cm long, high in a tree." From Wikipedia.

This adventure was only the second holiday of any kind, anywhere, that I have had in something like 30 or 35 years! The other holiday was a wonderful, one-week trip with my great friends from England, Linda and Tony, when we went down south to Yellowstone National Park and the Grand Tetons in September 2012. I have had maybe half a dozen weekends away, including to Waterton National Park, which have helped keep me going.

Six birding/photographer friends and I decided that we would take this exciting trip together (from 12-21 March 2017), spending the first two or three days on the island of Tobago and then the rest of the time at the Asa Wright Nature Centre on the nearby, much larger island of Trinidad. We decided to take a complete package, so everything was included - accommodation at both places, all our food, and the various walks and day trips that we could choose from. Also, we were so very lucky to get Black Friday prices, which were 50% off, for our flights., Two of my friends, Anne B. and Brenda, saw to all the planning of flights and accommodations, which was so very much appreciated by the rest of us. I could never have done all this myself!

What a time we had, seeing so many beautiful and interesting things - and, of course, everything was a lifer for me. Some of these friends had visited Costa Rica before, so I think were familiar with some of the birds. There was a lot more to see on Trinidad, so we were glad that we chose Tobago to visit first and then spend a longer time at Asa Wright. It was wonderful to be right by the sea, though, at the Blue Waters Inn on the island of Tobago. Just gorgeous.

The Asa Wright Nature Centre, on Trinidad, is such an amazing place! We stayed in cabins up or down hill from the main building. Really, one doesn't need to travel away from the Centre for birding, as so many different species visit the Hummingbird feeders that are right by the huge, open veranda, and the trees of the rain forest high up a mountainous road. The drive up and down this narrow, twisting, pot-holed road was an adventure in itself! Never would I ever do this drive myself - we had a guide who drove us everywhere in a van/small bus. I had read many accounts of this road, lol! There was enough room for two vehicles to squeeze past each other, and the honking of horns was almost continuous - either to warn any vehicle that might be coming fast around the next bend or as a sign that drivers knew each other. The drive along this road, from the coast to Asa Wright, took just over an hour each way.

Even after five months, I still miss the great food that was provided every single day at Asa Wright. The 'famous' Rum Punch appeared each evening. I never drink at all, so I wasn't sure if I would even try the Punch. Glad I did, though, as it was delicious and refreshing. Breakfast, lunch and dinner were all served buffet-style, with a great variety of dishes from which to choose. To me, pure luxury. So very, very grateful to have been invited to be part of this amazing adventure.

This is a video that I found on YouTube, taken by Rigdon Currie and Trish Johnson, at many of the same places we visited on Trinidad and Tobago. Not my video, but it made me feel like I was right there still. Posting the link here again, so that I won't lose it.

I also came across the following 27-minute YouTube video of the flora and fauna of Trinidad, filmed by John Patrick Smith in February 2015.