One of my forest finds 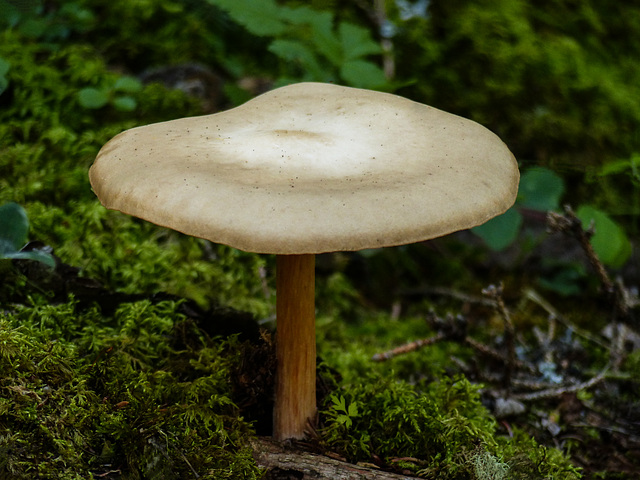 Four days ago, 8 August 2015, I decided to drive SW of the city for a while. It was a Saturday, so I thought I would go and check if there were other people parked at Brown-Lowery Provincial Park. I had more or less stopped going into the forest there by myself, especially the last couple of years, knowing that Cougar and Bears can be seen there. All I have seen - so far! - is a Moose on a couple of occasions. The place gives me the creeps, so I usually just walk through the trees closest to the parking lot.

So, this is what I did. Just a minute or two after entering the forest near the trail, I flushed a Grouse, which scared the life out of me. The opposite side of the trail, where I usually find a few mushrooms, had pools of water after the two devastating rain and hail storms that we had very recently, so I couldn't go there. With several cars in the small parking lot, I decided to go just a short way into the park, trying to forget that animals can "smell fear". I did come across a few quite nice mushrooms, but with such a dry, hot summer, this is not going to be a good year for fungi.

The second time my heart started beating really fast was when I was trying to focus on a mushroom and I was aware of a deep, huffing kind of sound coming from right behind me. Turning around, dreading what I might see, I discovered it was just a small Red Squirrel, low down on his/her tree, just a couple of feet away from me. I've never, ever heard a Squirrel make this kind of sound before! Sounded rather like what I imagine a bear might sound like.

Almost back at the edge of the forest, I was happy as can be to hear quite a commotion that I then recognized as being American Three-toed Woodpeckers. There were three of them high up a tree, with at least one of them being a noisy, hungry juvenile that was feeding itself but every now and then would want the adult to feed it. These birds are uncommon year-round in Alberta, so it's always a treat to see them - especially three.
Suggested groups:
Comments