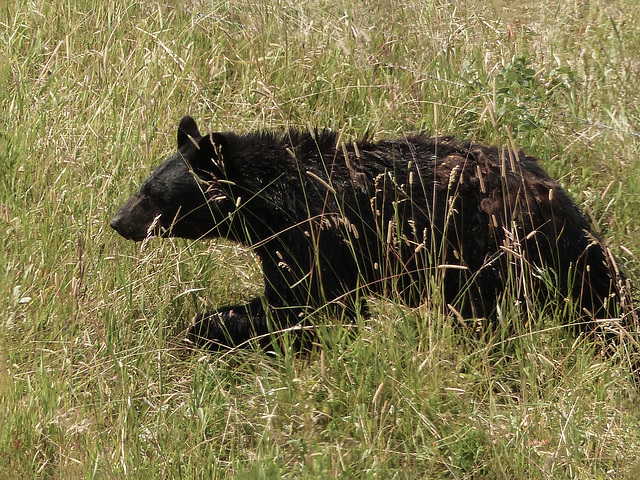 A very poor photo of a beautiful Black Bear that had just climbed under a barbed-wire fence before disappearing from sight behind bushes and trees. I have many much better photos in my photostream, but this was such a thrill to see yesterday and totally unexpected! Just a matter of minutes later, this Bear would have been where we had just ended our day out and we would have had an even bigger surprise, ha. As it was, we had reached our cars and had just turned a corner of the road to get on to a different road, when we saw something way down the road, that looked rather large, swimming in what was probably a temporary area of water near the edge of the road. Puzzled, we wondered if it might be a large Beaver. Then the animal climbed the low bank and we realized it was a Black Bear! I was in the front passenger seat, so couldn't get a very good view. When the bear climbed under the fence, I was able to get three or four rapid, poor shots, and this is the best of them. Not the kind of photo quality I would normally post as my main photo for the day, but it was the highlight of what had been a great day. Thanks so much for stopping, Sandy (and for the ride from and back to Calgary)! Much appreciated, as always.

The first words in an article from 3 October 2014, in The Western Producer, are as follows:

That’s where the bears bathe."

Well, we found out yesterday, 3 August 2015, that the bathing bears was so very true, even if the bathing /swimming was not in the usual place, lol! We had seen no sign of large wildlife all day, so this sighting was a real treat. This 640 acre site is located approximately 20 km southwest of Nanton. Other wildlife that can be seen include "moose, elk, white-tailed and mule deer, grizzly and black bear, cougar, grouse and a variety of small mammals and songbirds."

I had never been to the Porcupine Hills, but had read and heard about this area for a number of years. Lying south of Calgary and roughly SW of Nanton, it is an area of beautiful, rolling hills. This is where Glen and Kelly Hall "have a co-tenancy agreement with the Alberta Conservation Association (ACA), the first one ever established between that organization and private landholders. They own 68 percent of the site and the ACA owns the balance."

The drive from Calgary took maybe an hour and a half (?), with rain falling on the way there, and we were greeted with a warm welcome. They suggested we make our way straight up to the highest point and then to take our time coming back down. The first part of that journey was travelling in something new and fun to all of us - in a horse trailer! How DO horses make such a mess over every inch, lol?! After that, we climbed higher and higher, sometimes with the aid of an amazing little vehicle - a Kubota. I was in awe at how this tough little machine was able to travel over the roughest of land - rocks, ruts, uphill, downhill. We had some of the curious cattle follow us in places - several different breeds, and all looking beautiful and so healthy.

The rain stopped by the time we first arrived, but the mountains were hidden in haze (from the weather and possibly from forest fires). Far from ideal conditions for taking scenic shots of the surrounding hills and valleys, unfortunately. Wonderful views in every direction. By the afternoon, the temperature had risen to 31°C (about 88°F)!

Glen and Kelly, a delightful, enthusiastic couple, plan to conserve the site, but they don’t plan to keep it to themselves.

“Ultimately, one day, we want yellow school buses at the gates and we want kids here in numbers and we want them to learn where their water is, where the food is created,” said Kelly.

“We want them to learn about the trees and the grass because we have a lot of native species on this land that haven’t been interfered with.”

Thank you so much, both of you, for making this day so enjoyable and a great learning experience. We have a great deal of respect for what you are doing and how you are doing it. With all the exciting plans that you have for this amazing area, we know you will do well. Thank you for letting us do a bio-inventory of the living things on the 640 acre Timber Ridge Conservation Site!

There is just so much I could write about this special place, but will add several links below for further information in case anyone is interested to learn more.

We are under a Severe Thunderstorm Watch this afternoon, 4 August 2015:

"Conditions are favourable for the development of dangerous thunderstorms that may be capable of producing damaging wind gusts and damaging hail. A upper level system moving into southern Alberta has the potential to initiate severe thunderstorms this afternoon and evening."

Later: wow, what a storm we had this evening - massive falls of hail in some parts of the city, flash flooding, thunder, lightning, and extremely strong winds! My area didn't get the hail, thank goodness. So glad I didn't have to go anywhere today. My daughter said that some people in her area had almost a foot of accumulated hail!
Suggested groups:
Comments