Blending in Cormorants and their reflections One of my favourite finds Just a different perch Little nut and seed eater of the forest Pileated Woodpecker at work Horned Lark Summer dreams Making sure we go the right way Horse on the prairie Old barn with a view Layers and stripes Red barn on a sunny day Sitting so pretty Barn with a difference Mountains at sunset Tiny predator with prey Prairie Falcon Old homestead in sunset light From shadow to light Dreaming of summer flowers From my archives - Long-tailed Weasel Memories of last summer Bow River, E end of Fish Creek Park Way, way up Such a fun Moose It's mine! Another day closer to spring Great Gray Owl in early morning light A fine rural relic Mule Deer on the prairies Irresistibly cute Newly burst Poppy Stinkhorn fungus / Mutinus elegans Purple and white White Admiral Like finding a needle in a haystack The wonder of hoar frost Brown on brown Touched by the sun Mountain Sheep Time for another Pika shot American Three-toed Woodpecker Tilting "Just" a Mallard 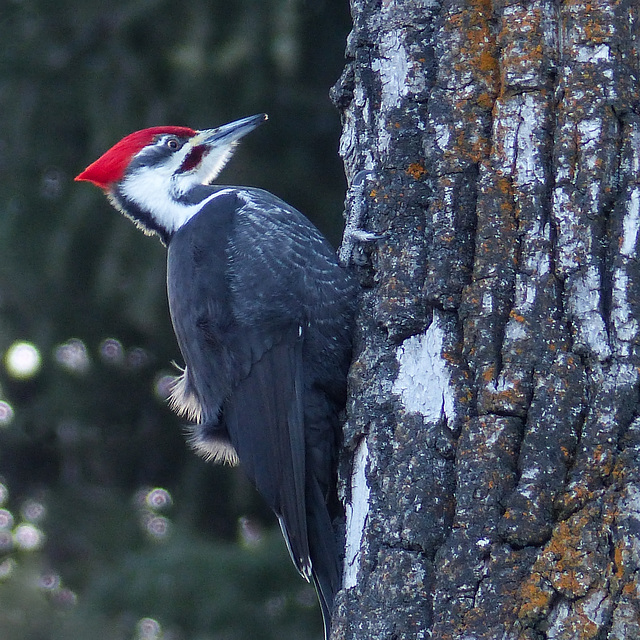 Yesterday, 8 February 2015, I decided that I would join a group of friends for a morning birding walk in Fish Creek Park. I tend to miss most of the walks, so felt it was OK to go a second time this week. We started at Shannon Terrace, covering a good part of the area, and then the group started heading eastwards, towards Bebo Grove. At that point, my body was telling me that I had done enough walking, so I left my friends and made my way back to the parking lot. We had seen the beautiful Pileated Woodpecker in this photo, which was perhaps the highlight of the walk. The light was not good as the Woodpecker was quite deep within the trees, but fortunately this photo was fit to post. I timed my return walk well, as I saw a pair of these spectacular birds out in the open. I'm guessing that the bird in this photo was one of the two I saw when I was by myself.

I went straight to the area of the park where the tiny Northern Pygmy-owl has been seen on many days for the last few weeks. However, when I was at that location yesterday, no one there had seen the owl at all, making it the fifth day in a row that it had not been seen.

Shortly after I arrived there, a friend drove into the parking lot and we got chatting about the extremely confusing system of the way roads outside the city limits are numbered. Roads can have two different numbers - a Range Rd/Township Rd number plus a street or avenue number. All the maps that I have seen give the RR/TWP number only, so it's very difficult to find a location given in St. or Ave. numbers. The reason for this chat was that some of us were unable to find on a map the locations for Wild Turkeys and Northern Hawk Owls that have been reported recently. My friend told me to hop in and we'd go looking for turkeys : )! He already knew this whole area SW of the city, but I had never driven that part. Even though we were unlucky with finding any of the birds, it was extremely helpful to me to just see what the area looked like - more hilly than I had imagined. An area where I know I could very easily get totally lost, especially given the confusing mess of road numbering! Many thanks, Phil, for this unexpected and very helpful trip!! I really appreciated it!

"The Pileated Woodpecker is one of the biggest, most striking forest birds on the continent. It’s nearly the size of a crow, black with bold white stripes down the neck and a flaming-red crest. Look (and listen) for Pileated Woodpeckers whacking at dead trees and fallen logs in search of their main prey, carpenter ants, leaving unique rectangular holes in the wood. The nest holes these birds make offer crucial shelter to many species including swifts, owls, ducks, bats, and pine martens." From AllAboutBirds.