Newly burst Poppy Irresistibly cute Mule Deer on the prairies A fine rural relic Great Gray Owl in early morning light Another day closer to spring It's mine! Such a fun Moose Way, way up Bow River, E end of Fish Creek Park Handsome Pileated Woodpecker Blending in Cormorants and their reflections One of my favourite finds Just a different perch Little nut and seed eater of the forest Pileated Woodpecker at work Horned Lark Summer dreams Making sure we go the right way Horse on the prairie Old barn with a view Layers and stripes Purple and white White Admiral Like finding a needle in a haystack The wonder of hoar frost Brown on brown Touched by the sun Mountain Sheep Time for another Pika shot American Three-toed Woodpecker Tilting "Just" a Mallard Yesterday's well-earned treat Coyote relaxing in the sun Gentle and curious Temporarily puffed after preening Delicate hoar frost Pileated Woodpecker female How did he get there? A prairie view Cold, bleak and frosty Our mountains in winter A ferocious hunter, popcan-size 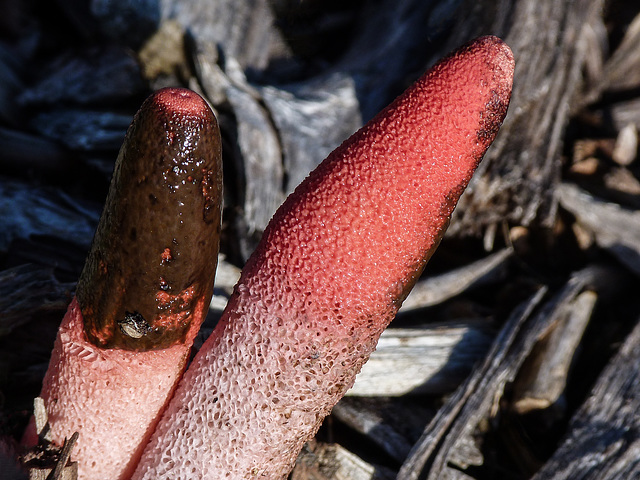 Thought I'd better quickly dig into my archives and find three things that are not winter scenes, owls or wildlife. Much as I love those three, I'm feeling the need for colour and something different. Recently, the main thing I have been seeing and photographing is the tiny, uncommon (in Alberta) Northern Pygmy-owl. I try to spread those photos out a little bit, but you are probably all getting weary of seeing this little guy/gal : ) Make the most of today, as I can't promise that I won't be back to the owl tomorrow or the next day, lol.

For years, I had wished I could see some kind of Stinkhorn fungus, partly because they make such dramatic images : ) Friend Phil e-mailed back in June 2012 to say that there were all sorts of "things" (he sent a photo) growing locally, where we had seen other fungi growing previously (i.e. a matter of a few feet outside the edge of Fish Creek Park). After a bit of a search, on 24 June 2012, I found these small (this is a telemacro image, and they are up to maybe 3" tall), pink fungi that I thought must be some species of Stinkhorn. Sure enough, I searched on Google and quickly found them. Wasn't quite sure exactly which species this was, as there were several similar ones. Thanks to kuteram for the ID: Mutinus elegans!

"The young fruiting bodies are initially white and spherical or egg-shaped, partially submerged in the ground, with dimensions of 2 to 3 cm (0.8 to 1.2 in) by 1 to 2 cm (0.4 to 0.8 in). As the fruit body matures, the egg ruptures and the spongy spore-bearing stalk emerges; fully grown, it may be from 1 to 15 cm (0.4 to 5.9 in) long and 1.5 to 2 cm (0.6 to 0.8 in) thick. The stalk is hollow and strongly wrinkled overall; its shape is cylindrical below, but it gradually tapers to a narrow apex with a small opening at the tip. The upper half of the stalk is bright red to reddish orange, and the color gradually loses intensity transforming into pinkish white below. The stalk may be straight, or slightly curved. A gelatinous greenish-brown gleba covers the upper third of the stalk in newly emerged specimens. The remains of the "egg" forms a volva around the base of the stalk .... Mutinus elegans is saprobic—deriving nutrients by breaking down dead or dying organic matter. It is commonly found in gardens and farm areas enriched with manure, near well-decayed stumps and logs, and in wood chips." From Wikipedia.

Strange and wonderful :-)
6 years ago. | Permalink