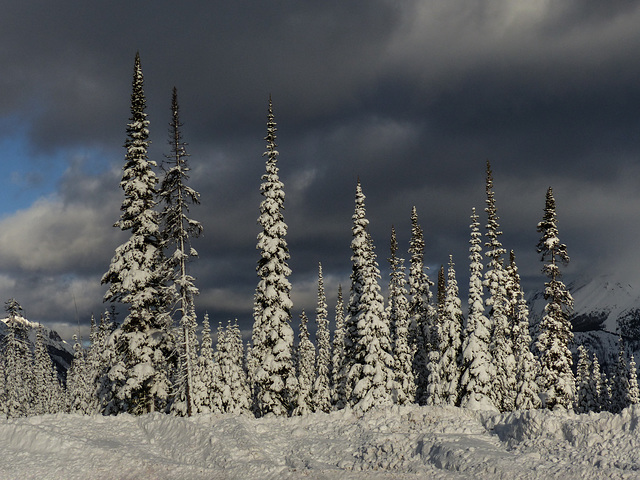 What a day I had a week ago (7 December 2014) with friends Cathy and Terry, in an absolute winter wonderland! We set off about 7:45 am (still dark) and drove westwards to the Kananaskis area of our majestic mountains. Early in the drive, the sunrise turned the still distant mountains pink. This is always such an amazing sight to see.

Once we had reached Kananaskis, we drove the area of Highway 40 that is still open (the rest of this highway is closed during the winter months) and also the Smith-Dorrien road. There had been a recent snowfall and the trees in many places were still covered in snow, which turned everywhere into a winter wonderland. There was no wind and the temperatures hovered a few degrees around 0C. At times, very dark clouds made a great contrast to the gleaming white snow. Sunshine, a few clouds, and fun company made it such a great day!

My friends had been hoping for a long time to be able to show me a winter Moose and this day they did really well, finding a beautiful female and, at another location, a male with antlers that looked rather like two little twigs sticking out of the side of his head. The size of both these wild animals was huge! The closest we saw them both was when they approached the car. You can stop the car some distance away from them, but if they are busy licking off the salt and minerals from any car in sight, they sometimes might eventually come close. All the female was interested in was doing this very thing : ) She would occasionally stop, straighten up and look and listen - usually this would be because she had heard or seen people snow-shoeing or cross-country skiing on a nearby trail through the forest. The rest of the time, she licked and licked and licked some more - the slurping sound could be heard from quite some distance : ) At one point, she bent both front knees to kneel, so that she could reach the lower part of a vehicle. Lol, she did a fine job of cleaning headlights till they shone. Impressive and rather amusing at the same time. Free carwash, anyone??

We saw the female first, then the youngish male, and then we saw the female a second time, later. After feeding on dead leaves and tiny twigs from under the deep snow, she then lay down in the snow near the edge of the trees - the first time I had ever seen a Moose lying down. Such a peaceful scene - no one else was around, either.

I always feel so privileged when I witness any kind of wildlife, especially so when you get the chance to watch a while and learn the behaviour of the animal or bird you are lucky enough to see. My friends were so delighted to be able to let me experience this yesterday, though I always tell them that just being in such spectacular scenery and being able to photograph the mountains is more than enough for me. This day, they did really, really well! Be warned that I took a lot of photos, so I hope you won't get tired of seeing Moose and snow-covered mountains! Guess I'll have to throw in the occasional old Weasel or Pika photo to break the monotony for you, ha.

Thanks so much, Cathy and Terry, for such a great day - including the delicious chili that you brought along. Hope you are enjoying going through your own photos (and videos).

novogorodec has particularly liked this photo