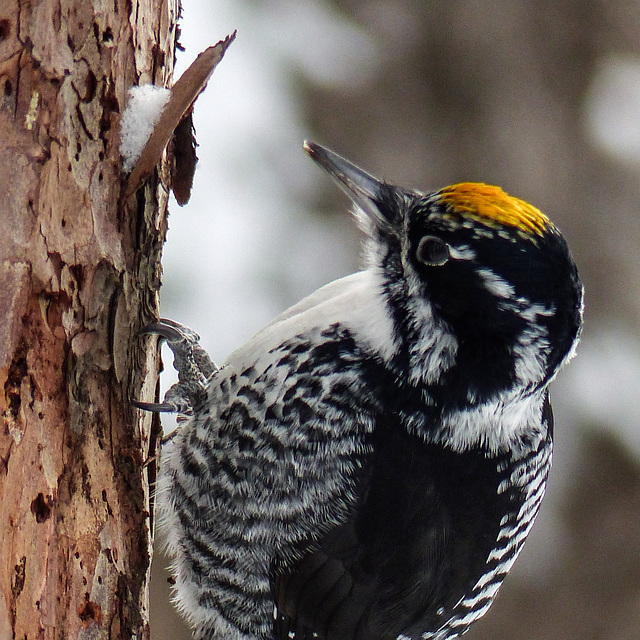 Taken five days ago (1 December 2014) in Fish Creek Park. After calling in at Votier’s Flats just before noon, I then drove over to Bebo Grove to see if there was any sign of the Barred Owl – no there wasn't and two other people had looked and been unsuccessful. I did see this male American Three-toed Woodpecker, though, which is always a treat, especially as it is rare species in Alberta. I love the bright yellow feathers that only the males have.

This photo shows a tree that has had a lot of its bark removed, leaving the orange-coloured wood exposed. The Woodpecker wants to get to the larvae that are beneath the bark, so the bark has to be removed. Some trees are almost completely orange, so much bark has been peeled away by a Woodpecker. In winter, when there is snow on the ground, you can see the small pieces of bark lying around the base of the tree, on top of the snow, if a Woodpecker has been at work very recently. Unfortunately, this photo is not as sharp as I wish it had been.

"The American Three-toed Woodpecker is found in boreal forests and montane coniferous forests across North America. Because of its choice of habitat, it is infrequently seen by most people." From AllAboutBirds.