Come into my parlour, said the spider to the (butter)fly 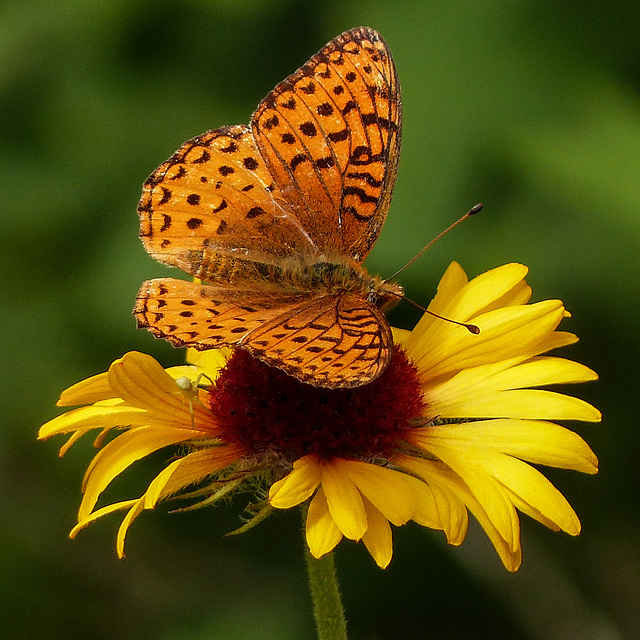 I didn't notice the tiny Crab Spider until I was looking at this image on my computer. It had changed its colour to match the Gaillardia flower that it was hiding in. Also, I was standing quite a few feet away, using telemacro to photograph the flower and Fritillary butterfly. Taken at Bow Valley Provincial Park on 20 July 2014.

That day, I plucked up courage to do a drive that I’d never done before. I had been that route once before that I can think of, when I carpooled with others. A good part of the drive was in familiar territory, but I’d never driven the last part of the journey myself. I had met my daughter at 9:00 a.m. and we were both eager to see a display of birds of prey that had been brought up from the Coaldale Birds of Prey Centre. We came across Dee (rockymtnchick) and her partner, there to see the owls. Great to see you both!

This year, there were fewer birds, but it was great to see any at all. There was a Burrowing Owl, a Barn Owl, a Great Horned Owl (photo posted yesterday), and a Golden Eagle. Another real treat that was an amusing one, was seeing a baby Barn Owl that was just 45 days old! This little ball of fluff was acting as a great ambassador, letting young kids get a close view and ask questions, and fall in love with it – and to hopefully, in the future, do everything they can as adults to protect our precious wildlife. The enjoyment of seeing these birds up close reminds one that the reason these birds are not free to live in the wild, is because of some kind of interaction with humans – such as permanent injuries from being hit by a vehicle, pesticide use, or even worse, being shot by a human! This is what happened to “Spirit”, the magnificent Golden Eagle, shot and blinded by someone.

This exhibit was our first destination in the park, though on the drive from Calgary, we had stopped at the small McDougall Church at Morley (one of the photos posted yesterday). After seeing and photographing the birds of prey, we then drove to Middle Lake that’s in a different part of the park. We walked the very short distance to the edge of the lake, but didn't walk around it. From there, we drove to Many Springs Trail and did a very slow walk around the lake, stopping to look at different flowers and photograph a few butterflies including this Fritillary. Though slow, it was still further than I should have walked. Certain wildflowers were already finished, including various Orchid species, but there were still plenty of other species to see and enjoy. Even the weather cooperated, though the forecast had been for isolated showers. Not too hot, nice clouds in the sky and lovely to have my daughter’s company for the day.

Thanks so much to the people down at the Coaldale Bird of Prey Centre (near Lethbridge, down towards the Canada/US border) for bringing your gorgeous birds of prey for us to see! I have been south to the Centre three times I think, and always long to go back again, but it's not somewhere I can drive to, so this was a much-appreciated treat!

Any of you having the same problem as me with Flickr today? Each photo page loads just fine - tags, descriptions, groups, albums are all there, but every single comment has disappeared. New and old photos now have no comments, just a blank, white space, and no comment box! Flickr staff should soon see the messages on the Help Forum, so hopefully it will be fixed very soon!

What a capture! I'm guessing that butterfly was just a tad too big for the crab spider? The flower and the butterfly are beautiful in their own right, but it's cool to see the crab spider too!
6 years ago. | Permalink