Small rocks, Red Rock Coulee Vulturine Guineafowl On the lookout The beauty of winter We need COLOUR! Gotta get that itch Inlay stone mosaic, Agra, India He's so fine Water droplets on a Lily pad l res Mom and the kids Thankful for archives Fringed Grass-of-Parnassus Ruddy Duck in the sunlight A couple of beauties Landscape of Red Rock Coulee Fritillary Frosted snow Peregrine Falcon Looking towards the treeline A little touch of sunshine Rooster at the Saskatoon Farm Saskatoon in May As beautiful as it gets Time for colour The wind effect When the fields were golden Last day before the winter gates closed Mom and baby Cedar Apple Rust on Juniper Patiently watching Narrowleaf Stoneseed Young Mountain Sheep Love a splash of orange Wind-blown Deserving of respect I think I can ... I think I can ... Suillus tomentosus - for mushroom soup Campanula incurva Happy Turkey (Vulture) Day to Americans, everywher… Hungry Mamma On top of a tree stump Along the Smith-Dorrien / Spray Trail Saying Hi Evening Grosbeaks from 2012 Persian Cornflower / Centaurea dealbata

Toughing out the winter 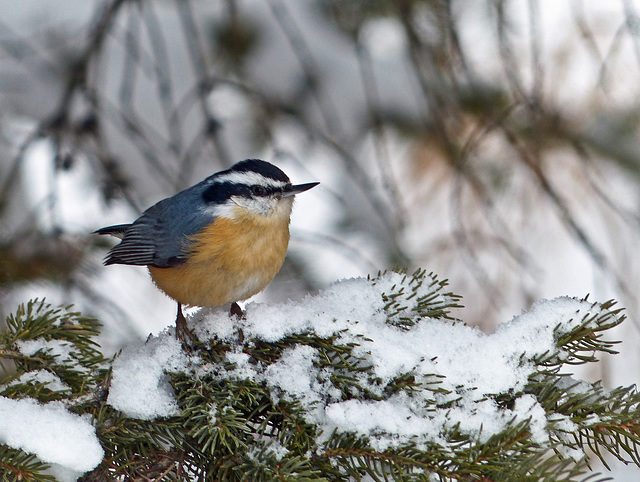 A photo from 4 March 2013 - doesn't it make you wonder how these tiny birds manage to survive the snow and frigid temperatures? Never fails to amaze me. Taken at Inglewood Bird Sanctuary, which I believe is still closed due to the devastation caused by Alberta's Flood of the Century in June 2013.

I only managed to upload the first of three images this evening. I don't remember ever having a problem with uploading before. Took forever for the second shot to finish and then I was told it didn't work. Eventually, after many tries, I chose another photo taken on the same day and it, too, is taking forever and I suspect that it isn't going to work.

Excellent shot of this Red-breasted Nuthatch Anne ... terrific clarity and details ... beautiful little bird in all of its colours ... a fantastic bokeh here too ... well taken and well present!!

Before we get colder, we will be up to 11C on Thursday ... I will look forward to this day at the park!!
7 years ago. | Permalink

I really like this picture! A beautiful clear image of the nuthatch and a fantastic pretty bokeh! I am fascinated by nuthatches. There are some out at my parents' place, but they are quick and difficult for me to get good pictures of. I see them a lot, but photographing them is challenging. And I love their distinct little calls too. (I also wonder how they can stand the cold, they must be tough little creatures)
7 years ago. | Permalink