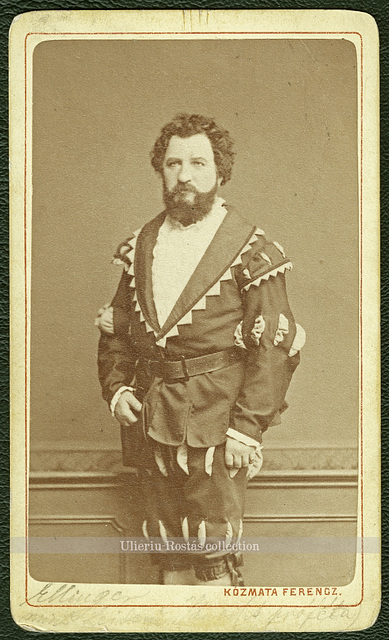 Ellinger József (1820-1891) was a Jewish-Hungarian heroic tenor of international prominence, active in the 1850s and 1860s in München (where he wins a contest arbitrated by Ludwig II of Bavaria), Regensburg, Pest, Vienna etc. From 1866, he came back to Pest to become a permanent member of the National Theatre (Nemzeti Színház). In Hungary, he is remembered above all as the first Bánk Bán in Erkel’s original 1861 distribution – the role he also chose for his retirement concert in 1880. Operatic singing became and remains a living family tradition in the Ellinger-Maleczky family.

The portrait shows Ellinger as Jean de Leyde (Leydeni János) in a Hungarian production of Meyerbeer’s Le prophète (A próféta), as indicated by the handwritten notes on the recto and verso. The photo can be dated with precision in 1873, after Kózmata had included his 1873 World Exposition medal on the verso, and just before the old name of Pest was officially supplanted by that of unified Budapest.

This photo resurfaced in Israel, as part of a set which included portraits of operetta singer Sík Gizella (fl. 1882-5), actress Blaha Lujza (1850-1926), actor Nagy Imre (1849-1893) and his wife, Benza Ida (1846-1880), all datable in the 1870s or early 1880s. I’ve speculated about its Jewish-Hungarian origin in my comments on Sík Gizella’s portrait, but this photo brings another clue to the story: the calligraphic handwriting in red ink on the verso is almost identical to the one seen on Gabi’s portrait (see below) of Ellinger in the role of Bánk Bán! To whom might have belonged that handwriting, and how were these photos separated by thousands of miles? To be continued!