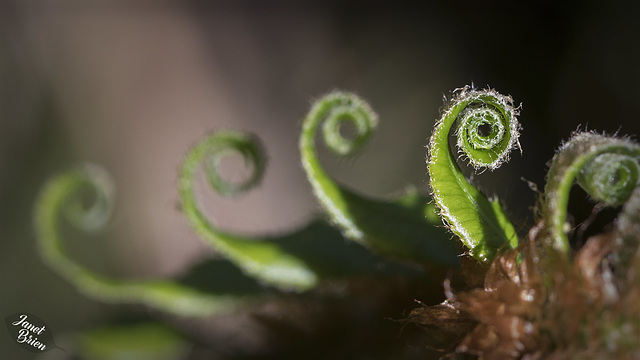 (+5 insets) (clicking on this picture is recommended! :D)

Lovely Walks at Harris Beach State Park
My morning routine is to get up, shower, have my coffee and vitamin mix, and pop out the door for a walk which is ideally three miles or longer. Yet another reason this park is so perfect is that I designed a walk which is 3.5 miles and full of plenty of cardio, along with jaw-dropping scenery. I almost always take my phone with me, but sometimes I bring my Canon with 100mm 2.8L lens for some macro fun, and other times I bring my Sony bridge camera for zooming in on wildlife or fun activities that I find along the way.

Today's Picture
This lovely unfurling fern was just one of the masses of glowing spring growth that I saw everywhere on my walks. It's November as I post this, but it was the beginning of April when we started our trip and I really enjoyed seeing what budding springtime was like out on the coast.

Today's Insets
I got so many wonderful pictures with all three of my cameras while we were here! Today's handful of insets include a lovely mushroom, a pair of colorful ivy leaves, a playful collage showing a Mountain Chickadee, a bunny that I saw many times on my walks, and finally, a weathered whale skull mounted on a stand visible along one of the campground loops.

Thank You For the Visits and Welcoming Home!
I hope everyone is doing well! I have really enjoyed your visits and comments, and I'm making my rounds as time permits. Wow, it's so nice to be back!! I'm going to try to post every couple of days so I can get more pictures posted…there are so many that I've processed, and so so so many that are waiting for my attention! I hope I'll be able to share lots and lots, and I hope also to catch up with everyone too!

Fantastic your course of sharpness. And another very nice series, Janet !
2 months ago. | Permalink

Wonderful collection of pictures as usual, Janet. I've so missed your blogs and pictures. I love the little chickadee and bunny. I've never seen a chickadee before - I suppose that's what was meant when people would say "Oh my little chickadee!!" that this was a sweet little bird. Your unfurling ferns are great. I have ferns in my garden, and really do like to see them unfurling, yet why do yours look so much healthier??!!! Looking forward to seeing more of your pics and hearing more of your travels.
2 months ago. | Permalink

So good to have you back, Janet. I really like the photos of the bunny and chickadees.
2 months ago. | Permalink

A superb image with wonderful use of DOF Janet and a great set of wildlife shots
2 months ago. | Permalink

Admired in: www.ipernity.com/group/tolerance
2 months ago. | Permalink

Gorgeous series Janet, my fave is the main one but all are enjoyable
2 months ago. | Permalink

happy you are back and engaging with us again! this is such a beautiful photo. i like imagining you crouched somewhere to get this perspective *smile*
2 months ago. | Permalink

I love those sweet little chickadees.
2 months ago. | Permalink

What a beautiful, smile-inducing macro in your main, Janet! It brings home all the delights of discovering the secret beauty of the small world though macro. Lovely selection of pips, too. The whale skull is so different from the shapes we associate with skulls it almost feels otherworldly. I was given a whale vertebra (currently gracing my internal stairway) and that is quite impressive for its size, but not nearly as startling as this skull. I love the images of the little creatures that shared your walks with you.
2 months ago. | Permalink

There are many beautiful photos of ferns I've seen,
but this surpasses them all, and is a true masterpiece.
A great series, Janet!
2 months ago. | Permalink

You have such a wonderful eye for photography. Each image in this series is lovely.
2 months ago. | Permalink

Well seen and I like the PiP's.
Janet - There are two groups of Karl Blossfeld *. I think you know him. He took wonderful black and white photos of the plants and seeds that are so artistic in their nature.
Among other things, the fern had also done it to him. I have two books by him.

Karl Blossfeldt (born June 13, 1865 - † December 9, 1932) was a German photographer who was best known for his strictly formal plant photographs.

These are just the like I love the most! Brilliant.
2 months ago. | Permalink