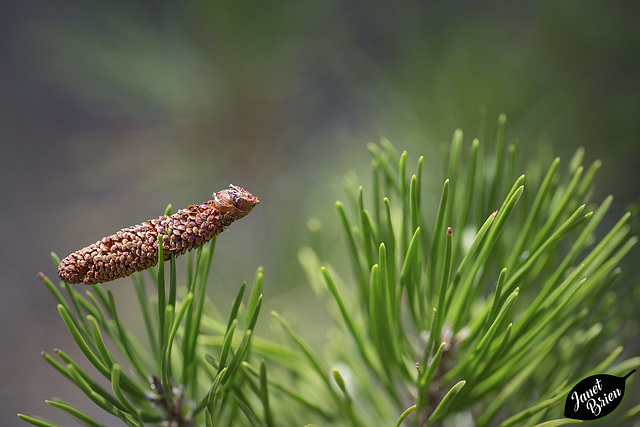 "Normal" Pine Cones Are Females!
Imagine my surprise when I learned that pine trees have two kinds of cones: female and male! Actually, just go look in the mirror…because I am sure you're equally surprised! But stop and think: have you ever seen the curious little things scattered around on the ground under a pine tree that defy explanation? Or weird clusters of odd growths on some pine trees that you couldn't identify? Those are the male cones which are responsible for releasing pollen. We don't usually see the male cones because they are often found at the tops of the trees. However, some trees have male cones lower down. In fact, some trees are entirely covered with either male or female cones. If you'd like to know more, Wiki's Conifer Cone page is full of useful information, and NW Conifers: Lodgepole Pine talks about this species specifically.

Today's Picture
I was creeping around LaPine State Park and found myself admiring one of the countless pine trees there. The park has many species, mostly Ponderosa and Douglas Fir, but there are many others too--grand fir, cedar, larch and juniper to name a few. My eye was drawn to something odd on a cluster of pine needles and upon recognizing what I was looking at, a smile spread across my face. It was a male pine cone which has incredulously skewered itself on the pine needles. Shaking my head in disbelief, I stared as I brought my camera up for pictures. How in the world does this happen? Naturally it's merely statistics and I'm looking at the lucky winner of Nature's contest, "Caught on the Way Down." It's a favorite of mine and I cannot resist taking pictures of these miraculous finds. I'm not surprised that people have asked me many times, "Did you stage that shot?" It's reasonable to doubt these sights--seeing them out on my strolls, I have a hard time processing their probability too! But occur they do, and I'd never, ever "set a stage" for a "better" picture. This is Nature at her gob-smacking finest!

Today's Insets
Insets 1 & 2: Here and there on the pine needle-carpeted floor of the forest, the remnants of coralroot orchids could be seen. Standing as high as 8-10 inches tall, the dried stalks bristle with sticky resin that likely tastes horrible to deter opportunistic munchers. These unusual orchids can bloom from April to September depending on conditions but I believe what I'm showing is merely a dead plant, a bloom that was frozen in time and dried to show the moment. Could I be wrong? The lovely little black and white wasp I found seemed to think so, busy with hopes of nectar inside. To be honest, I didn't touch this plant so I am speculating its dried state. As it is, I'm not positive on the species either--coralroots can be very different from one another and yet are still the same species. I have not seen flowers that look just like this so I may be wrong! Let me know if you have info to clarify!

Insets 3 &4: The forest around LaPine State Park is almost entirely brown or conifer-green, so when another color shows itself, you notice! First you'll see what I believe is a pair of wild gooseberries and they grow on tough shrubby bushes, determined to thrive in this dry desert environment. I also found a berry which had dried up, fallen off the bush and landed on the twig of another bush. I liked the translucence, wrinkled texture and the interesting lines of the twig branching this way and that.

Inset 5: Once in a while I noticed odd burl-like growths on the branches of pine trees. I have learned that this is actually a disease called western gall rust. It can kill trees but for homeowners, these trees can be successfully treated.

Inset 6: Finally, I've got a b/w image of a group of "golf-tee" fruticose lichen I found dried on a stump, waiting silently for the rain of late fall to arrive and bring it back to life.

Inset 7: I added this last picture to show male cones growing on a tree. These were on our property! :)

Thank You!
There are few things that make me happier than knowing that a picture I took has made another person happy. What a gift it is to share my love of photography with others! Your visits, comments and stars truly make my day. It's such fun to see what you've come up with to share with us too, so thank you very much for the opportunity!

I hope that everyone has been having a great week so far! Please stay safe, dry and warm!

Another series which is so nice again, Janet !
2 weeks ago. Translate | Permalink

Great close-up series! The lichen shot is very special! And the orchid images are stunning!
2 weeks ago. Edited 2 weeks ago. | Permalink

A superb capture with lovely use of DOF Janet
2 weeks ago. | Permalink

What fantastic pictures, Janet. These are amazing photos and no doubt you will make us all envious when you and Steve go on holiday again and take fabulous pictures like you always do. I am so jealous that you can walk around and capture these superb items. Still the next best thing is to see them through your eyes. We would probably walk past them, not realising what we are missing, so thank you so much for showing us these lovely things.
2 weeks ago. | Permalink

ACTUALLY NO !! NOT SURPRISED. HAVE ALWAYS BEEN AMONGST PINES IN ONE WAY OR ANOTHER.

HERE IN MY WILD 2 ACRES THE PINES ARE MY FAVOURITE PLACE TO BE. EVEN IF PINES DO NOT DO WELL IN OK... I THANK THE 2 SOULS WHO PLANTED PINES HERE. I HAVE 4 SPECIES.

THEY ARE ALL IN DEEP POLLEN TIME NOW.
2 weeks ago. | Permalink

Awesome series of images Janet.
Like the second PiP most of all.
2 weeks ago. | Permalink

Lovely series Janet. I never knew that about pine cones, so I have learnt something today...thank you !!!
Have a good day my friend ;-)
2 weeks ago. | Permalink

An excellent macro series, Janet. I'd never thought of male and female pine cones, I must admit!
2 weeks ago. | Permalink

Janet, I love the way you find things to photograph that a lot of people would just dismiss or pass by without noticing...........your fantastic captures in the main image and in PiPs 4,5 and 6 are perfect examples of that. Just wonderful..!!

All of the series are just wonderful janet.
2 weeks ago. | Permalink

I see a lot of nice little surprises in this great series of pictures, Janet
It's nice that we can share pictures like this - and it's fun.
2 weeks ago. | Permalink